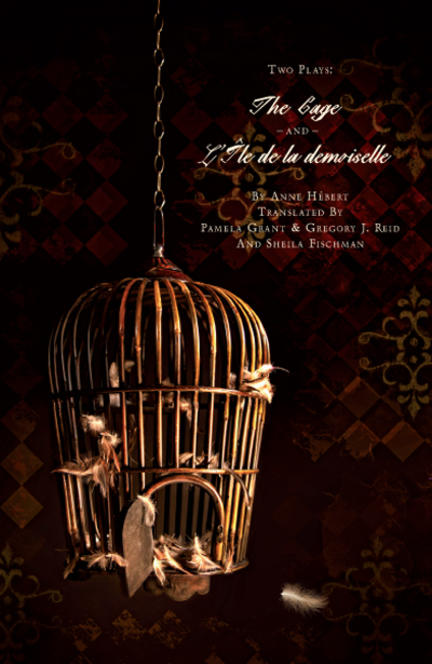 Inspired by events in French Canada's colonial history that have become mythologized in literature and culture, both plays centre on women struggling to break the bonds of their confinement.

In The Cage, the young "La Corriveau" is tried for murder in an unjust English court in Quebec City, while L'Île de la demoiselle focuses on Marguerite de Nontron, a woman banished to the uninhabitable island known as L'Île des Démons in the Gulf of the St. Lawrence. Translated into breathtaking and poetic English by Pamela Grant, Gregory J. Reid, and Sheila Fischman, this collection brings forth the power and magnitude of Anne Hébert's abilities as an author and a dramatist.

Anne Hébert was born on August 1, 1916 in Sainte-Catherine-de-Fossambault, a small village 40 kilometres from Quebec City. When she died in January 2000, she was one of Canada's most highly acclaimed and successful literary stars.

Pamela Grant is a professor in the DÃ©partement des lettres et communications at the UniversitÃ© de Sherbrooke in Quebec, where she teaches translation, writing skills, and editing.

Gregory J. Reid is a professor of English and Comparative Literature in the DÃ©partement des lettres et communications at the UniversitÃ© de Sherbrooke.

Louise H. Forsyth has always loved performance and theatre. As an amateur lover of the stage, she has acted, sung, danced, written, directed, produced, translated, stage managed, served as props manager, and hung out as much as she could as spectator. Woven into an amateur obsession with theatre has been her professional life, where she wrote two theses on the classic French writer of theatrical comedy, MoliÃ¨re, taught courses and supervised theses in theatre, drama, and dramatic literature, wrote scholarly studies about French and QuÃ©bec playwrights, and theorized about acting and dramatic writing. Her areas of academic specialization are feminist performance and dramaturgy in QuÃ©bec. Along with her passion for what the women of QuÃ©bec have written for theatre, she has been engaged for quite some time with developing theories of dramaturgy and acting au fÃ©minin, along with revealing the sources of tenacious sexism in the practices and conventions for doing theatre, for studying and evaluating it, and for recounting its history. In short, she has been wondering for quite some time why womenâ??s roles have tended to remain stereotypical in works for stage, TV and film, why theatre done by womenâ??when its perspective is explicitly derived from a womanâ??s point of viewâ??is still easily dismissed with a summary shrug as deserving only condescending scorn, why womenâ??s theatrical experimentation is so rarely discussed by scholars as serious theoretical work or used by them in their own theoretical reflections, and why the silence of critics on women and their richly creative activities has not yet been overcome when it comes to their accounts of theatre history.

Other titles by Anne Hébert

A Suit of Light

Am I Disturbing You /tpf

Am I Disturbing You?

Day Has No Equal But the Night /tpf

Other titles by Louise H. Forsyth

Anthology of Quebec Women's Plays in English Translation Volume One