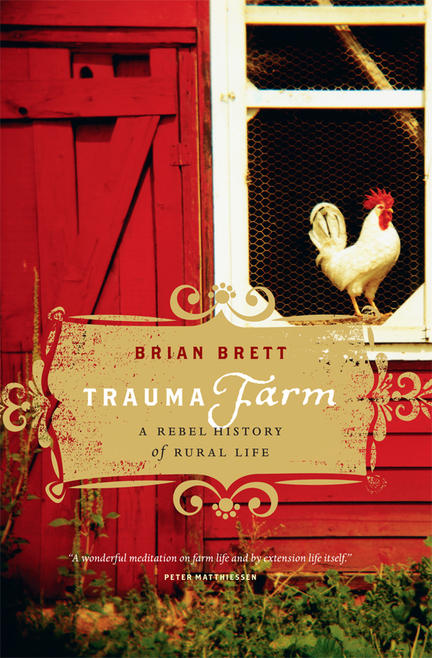 Trauma Farm was a 2009 book of the year in the Times Literary Supplement and the Globe & Mail, and winner of Writers’ Trust Canadian Non-Fiction Prize.

“Brett's wise and witty meditation on farm life makes a compelling case for a simpler existence in a rural world.”—Globe & Mail

An irreverent and illuminating journey through a day in the life of writer and poet Brian brett, as he tends a small island farm on Salt Spring Island, affectionately named Trauma Farm, with numerous side trips into the natural history of farming.

Brian Brett moves from the tending of livestock, poultry, orchards, gardens, machinery, and fields to the social intricacies of rural communities and, finally, to an encounter with a magnificent deer in the silver moonlight of a magical farm field. Brett understands both tall tales and rigorous science as he explores the small mixed farm—meditating on the perfection of the egg and the nature of soil while also offering a scathing critique of agribusiness and the horror of modern slaughterhouses. Whether discussing the uses and misuses of gates, examining the energy of seeds, or bantering with his family, farm hands, and neighbours, he remains aware of the miracles of life, birth, and death that confront the rural world every day.

Trauma Farm tells a story that is passionate, practical, and frequently hilarious, providing an unforgettable portrait of one farm and our separation from the natural world, as well as a common-sense analysis of rural life. Also available in hardcover.

Books You'll Think About for Days and Years