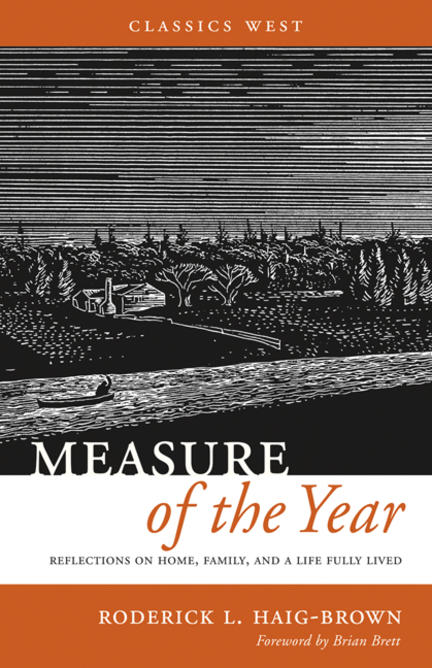 Roderick L. Haig-Brown welcomes us onto his lush farm for a year of insights and observations. In this eloquently written account, Haig-Brown, his wife Ann and their four children tour us through each season, and teach us the ways in which the Earth governs the events in our lives. Haig-Brown observes salmon, blue grouse, blacktail deer and robins, with a soft eye and gentle appreciation for their trials. He discerns how the weather interacts with the land, and how the land interacts with our attempts at civilization. Haig-Brown also discusses his work at a magistrate, and the challenges of marriage, amateur book collecting, the craft of the writer, and the meaning of community. A snap shot of rural BC in the 1950s, Measure of the Year is a country story, told by a man happy in his chosen way of life.

Roderick L. Haig-Brown (1908-1976) was a Canadian writer, magistrate and conservationist. A prolific writer, he is the author of twenty-eight books and hundreds of articles, essays and poems. Some of the titles include Saltwater Summer (Governor General Award Winner, 1948), A River Never Sleeps, and Fisherman's Summer. In recognition of his contribution to Canadian environmental literature, the Haig-Brown name has been gifted to a national park near Kamloops, a Canada Council sponsored writer-in-residence retreat near Campbell River, and a mountain on Vancouver Island.

Although dated in its masculine language, the book remains startlingly contemporary. Its reflections on conservation, community, compassionate justice, and the mistreatment of Aboriginal populations are, sadly, every bit as relevant today as they were six decades ago. By John Ruskin's measure, this is not a book of the hour but a book of all time. — BC Studies

Other titles by Roderick Haig-Brown

Seasons of a Fisherman, The