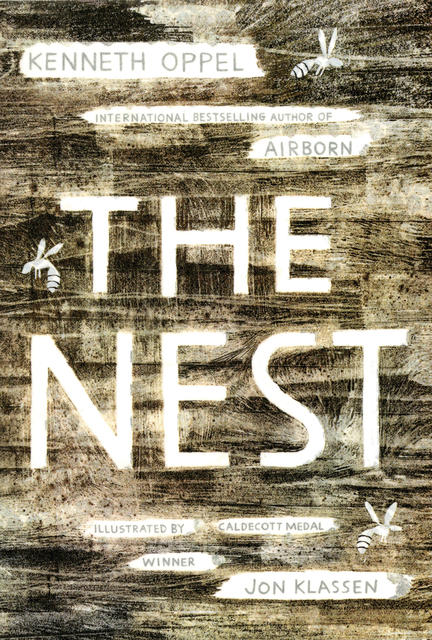 A New York Times Editor’s Choice and a Best Book of the Year in the Globe and Mail, Publishers Weekly, Horn Book, School Library Journal and The Wall Street Journal, called “a masterpiece” (Globe and Mail) and now in paperback

She was very blurry, not at all human looking. There were huge dark eyes, and a kind of mane made of light, and when she spoke, I couldn’t see a mouth moving, but I felt her words, like a breeze against my face, and I understood her completely.

In this beautiful, menacing novel, perfect for fans of Neil Gaiman’s Coraline, an anxious boy becomes convinced that angels will save his sick baby brother. But these are creatures of a very different kind, and their plan for the baby has a twist. Layer by layer, the boy unravels the truth about his new friends as the time remaining to save his brother ticks down.

With evocative and disquieting illustrations by Caldecott Medal– and Governor General’s Award–winning artist Jon Klassen, The Nest is an unforgettable journey into one boy’s deepest insecurities and darkest fears.

Jon Klassen grew up in Niagara Falls, Canada, and now lives in Los Angeles, California. He is the Caldecott Award-winning author and illustrator of I Want My Hat Back and This Is Not My Hat, as well as the illustrator of Sam and Dave Dig a Hole and Extra Yarn by Mac Barnett; The Dark by Lemony Snicket; House Held Up by Trees by Ted Kooser; Cats' Night Out by Caroline Stutson; and the first three books in the Incorrigible Children of Ashton Place series.

“This quiet yet emotionally haunting book thoughtfully explores themes of safety, anxiety, and the beauty of the imperfect . . . [An] affecting middle grade psychological thriller.”

“A masterpiece, and deeply heartening proof that two of our country’s best artists are continuing to take risks and grow artistically, even at the height of their careers.”

“A tight and focused story about the dangers of wishing things back to normal at any cost . . . the emotional resonance is deep, and Steve’s precarious interactions with the honey-voiced queen make one’s skin crawl.”

“With subtle, spine-chilling horror at its heart, this tale of triumph over monsters-both outside and in-is outstanding . . . a match made in kid-lit heaven.”

Other titles by Jon Klassen

Authors of Canada's most celebrated new kids' books share the inspirations for their work.