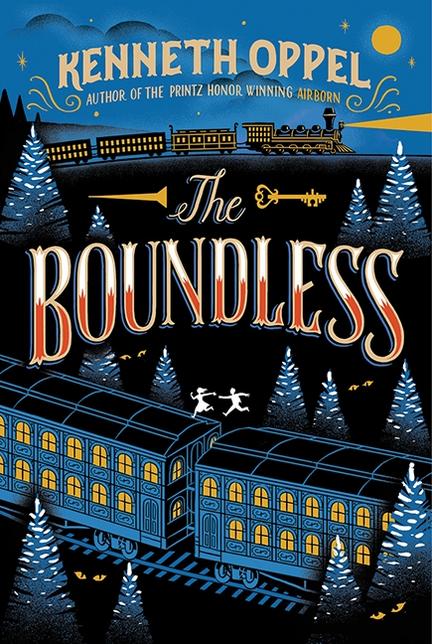 All aboard for a non-stop fantasy adventure on the Titanic of trains!

"Will stares up, too. The locomotive steams, her hot breath curling from the smokestacks atop the three-storey boiler. He can feel the tremor of her expectant power through the station platform, through the very air. Massive and black, she’s like something forged with lightning and thunder."

Will Everett wasn’t born with a silver spoon in his mouth, but after his family’s fortunes change, he finds himself with a first-class ticket for The Boundless. The longest, most glamorous locomotive in the world, it stretches more than eleven kilometres long and pulls an astounding 987 cars: passenger cars, shooting galleries, gardens, an onboard swimming pool, cinema and much more. But its maiden voyage won’t be a smooth ride for Will. After witnessing a murder during a station stop, he barely makes it back onto the train (with a running leap!), then must work his way from the caboose forward to his father in first class—with the murderer and his cronies on his tail. Luckily, a clever and nimble friend is perfecting her act in The Boundless’s circus car, and there the real thrill ride begins. Sasquatches, bog-dwelling hags and illusions abound in this outsized middle-grade adventure.

“Vividly imagined...heart-stopping action scenes involving dozens of memorable characters. An epic journey novel with a distinctive setting, a powerful sense of adventure, and just a whiff of steampunk. Expect hoards of passengers aboard The Boundless.”

With its imaginative plot, cast of colorful, well-rounded characters, and nonstop action, Oppel’s latest is a delight to read from the first page right through the satisfying conclusion. Take note: This book will be popular!”

“A wild, cinematic ride: Canadian railway history, fantasy, a flutter of romance- and a thoughtful examination of social injustice-collide in this entertaining swashbuckler.”

Canadian YA for the Twitteratti

How to Model Believable Chaos: A Round-Table on World-Building

We talk to sci-fi and fantasy writers about how they make their worlds, and why it's so important.