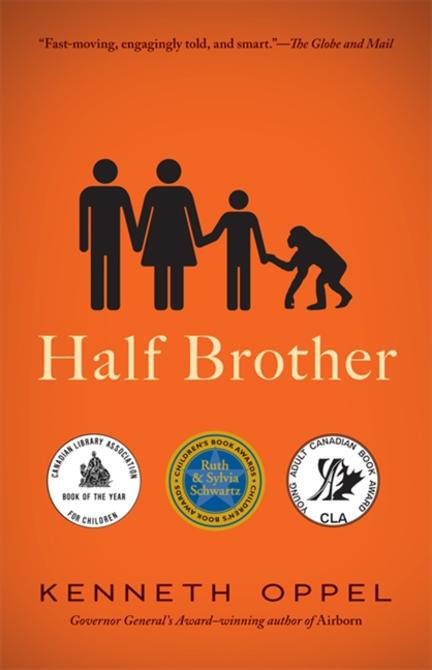 When Ben Tomlin's mother brings home his new “baby brother,” an eight-day-old chimpanzee, Ben is far from thrilled. His father, a renowned behavioural scientist, has uprooted the family and moved them halfway across the country, to Victoria, B.C., so he can pursue a high-profile experiment?to determine whether chimpanzees can learn human sign language.

Zan must be raised exactly like a human. He's dressed in clothes and fed in a high chair and has a room full of toys and books. Ben is soon smitten. Joining the team of students who are helping with the experiment, Ben becomes both researcher and adored older brother.

Within months, Zan learns his first signs and becomes a media sensation. At his new school, Ben's life seems similarly charmed as he vies for the attention of the beautiful Jennifer?using his newly acquired scientific observational skills.

But when Project Zan unexpectedly loses its funding, Ben's father is under huge pressure to either make the experiment succeed or abandon it?and Zan. Unable to convince his father that Zan is now part of the family, Ben must risk everything to save his baby brother from an unimaginable fate.

When 13-year-old Ben and his scientist parents leave their home in Toronto to move to Victoria, British Columbia for his father’s important research project, Ben resigns himself to starting at a new school and making new friends. Typically, his father doesn’t seem interested in how Ben feels about any of this, all he can think about is his latest experiment in which he will study the possibility of teaching a chimpanzee sign language. As if the move isn’t enough to deal with, Ben is now also faced with the challenge of welcoming a baby chimp into their home and family and treating it like a baby brother.

This proves to be less of a hardship than he originally thought, and soon Ben is deeply attached to Zan. He starts to have serious misgivings, however, as he becomes increasingly conscious of his father’s feelings about the little chimp: that he is simply an experiment and nothing more. When it looks like the project will be reaching an unexpected and early end, Ben knows that he will have to protect Zan. The question becomes “how?”

In this departure from his other award-winning novels, Kenneth Oppel brings readers a provocative tale of one boy’s determination to do what he knows is right. Ben is a typical teen boy who struggles to make a name for himself in his new school and to capture the heart of beautiful Jennifer Godwin. He also alternates between wanting to please his father and wanting to turn his back on him forever. This is a poignant and powerful story that challenges readers to reflect on the meaning of family and on our relationship with, and responsibility towards, the creatures with whom we share the earth. It is a complex family drama, and a profoundly sweet coming-of-age story. But most of all, it is a heartwarming, bittersweet story of the deep and lasting bond between a boy and his little brother.

As Ben’s family and a team of behavioural scientists attempt to teach Zan, the baby chimp, how to communicate using American Sign Language, they discover the complexities of humanizing a wild animal. Ben must risk everything he knows and everyone he loves in order to save his new “baby brother” and keep him in the family. This thought-provoking novel forces us to look at both sides of the science-versus-animal-rights issue.

There's a Monkey on Your Book