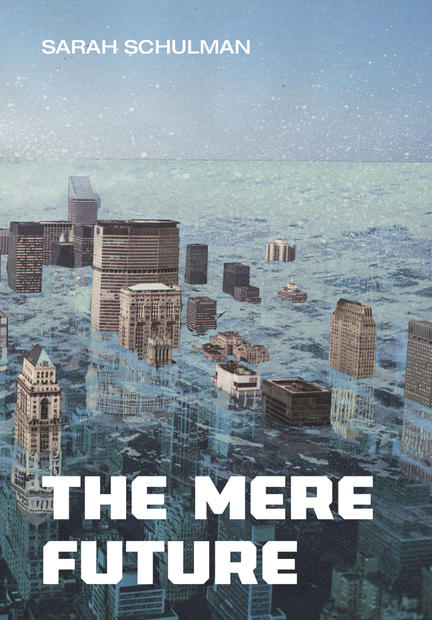 From the nation that elected Barack Obama in the flames of economic disaster comes the first novel of the New Era, The Mere Future, by award-winning novelist, activist, and playwright Sarah Schulman. In this dystopian vision, New York City has morphed into an idealized version of itself, the result of what the newly elected mayor calls The Big Change. Rent is cheap, homelessness is over, and everyone works in Marketing. Despite the utopian surface, however, there is a disturbing malaise that infects the population. Our heroine, a lowly copywriter, and her girlfriend Nadine just want to fall in love all over again, but can't help noticing that the social packaging may not be recyclable.

Calling on all genres?literary fiction, mystery, fantasy, poetry, and stand-up comedy?Schulman invents a literature that reflects the lives we live right now while being funny, sexy, and open-hearted.

Sparkling with witty and provocative social commentary, The Mere Future is a startlingly sharp-eyed prophecy of the world to come that blows literary conventions out of the water.

Sarah Schulman is, in my opinion, one of the most underrated American novelists alive today.... The Mere Future tops my holiday wish list. It's described as the first "post-Obama" novel, set in a supposedly utopian New York City. But utopias are in the eye of the beholder, and a dystopia lurks beneath the surface. Schulman's fearless and literate style can be counted on to make this the sort of novel that is reread many times.
?Sacramento News and Reviews

In Schulman's remarkable near-future novel,Manhattan has been reinvented through profound social reform - a "Big Change" fomented by a new (lady) mayor in which rent is suddenly, astonishingly affordable, nobody is homeless, and ubiquitous Starbucks storefronts (and every other chain store) have magically disappeared.... Schulman injects wry political commentary and sly cultural satire into her intellectually dynamic plot with infectious constancy.
?Richard Labonte, Book Marks

Shockingly of the moment.... The Mere Future is set a few years hence "when things are slightly better because there has been a big change," and, as she always does, Schulman fashions a writing style that suits the setting.... [This] is probably Schulman's funniest book.
?Lambda Book Report

In this dystopic, hell-ride of a novel, Sarah Schulman, New York's legendary poet-maudit, is grappling with something that matters. The Mere Future is a rare combination of brains and humor, by turns enlightened and terrifying.
?Nick Flynn, author of Another Bullshit Night in Suck City

The Mere Future wrestles with the hard questions without losing its heart or humor. As always, Sarah Schulman is a wise interpreter of culture, pointing out truths that aren't always obvious. Her characters try to figure out what it means to be in love in a world where everything is for sale. She's the writer who lets us know if the ticking we hear is a clock or a bomb.
?Tayari Jones, author of Leaving Atlanta and The Untelling

In the latter part of the 20th century, Sarah Schulman was the American novelist who wrote scorching dispatches from the front about the AIDS epidemic. A formidable Swiftian, she continues to lampoon the absurdity of our mores and the world we live in. But Schulman's calm, measured, voice in The Mere Future is startlingly new?prophetic, wise and true.
?Jaime Manrique, author of Our Lives Are the Rivers