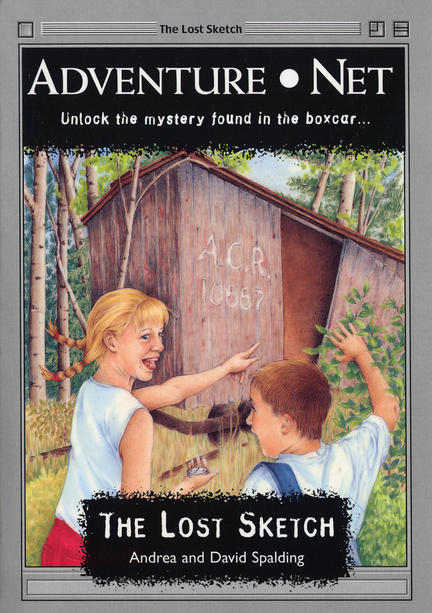 When Rick and Willow Forster find an old sketch hidden in a boxcar, Rick assumes it¬ís junk. But Willow¬ís instincts tell her otherwise. Could this be a sketch by one of the Group of Seven painters? Could this be the legendary boxcar where they spent their summers? Suddenly Rick and Willow find their ordinary week at camp transformed into a thrilling adventure as the two new detectives search the web, the woods, and the town nearby for clues. When Kristo, the local art dealer, starts acting more and more suspiciously, and when Willow¬ís hunches seem like they may be true, Rick and Willow are caught up in a chain of events that includes a race through the woods to beat Kristo to the boxcar, an encounter with a pack of ¬ìwolves,¬î and a trip to the officials at the Art Gallery of Ontario. Packed with intrigue and mystery, The Lost Sketch is a fascinating exploration of the lives of Group of Seven painters. Non-fiction sidebars offer amazing information about the group members, painting styles, copies and forgeries, and more. Andrea Spalding has written eight books for children, including Finders Keepers, An Island of My Own, Phoebe and the Gypsy, Sarah May and the New Red Dress, and Me and Mr. Mah. David has written, co-written, or edited ten books. Most are about science for adults, with recent books about dinosaurs and whales. Andrea and David live on Pender Island in British Columbia and are excited about teaming up to write this new children¬ís adventure series.