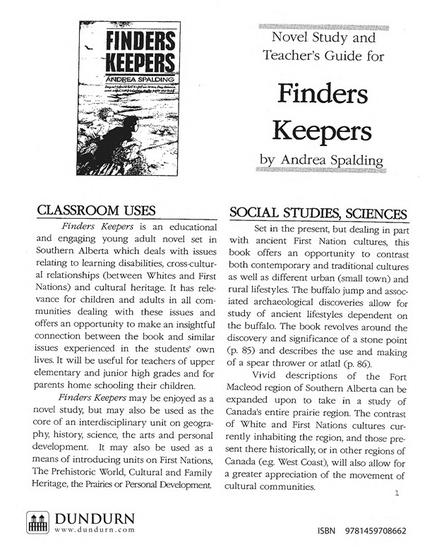 Short-listed for the Sheila A. Egoff Award for Children’s Literature, 1996, the Violet Downey IODE Book Award, 1996 and the Silver Birch Award, 1997
While walking through a neighbourhood field in Alberta, Danny finds an 8,000-year-old arrowhead. His friend Joshua, who lives on the Peigan reserve at Head-Smashed-In Buffalo Jump, joins him on buffalo hunts, powwows, archaeological digs, and a break-in at the local museum. In the process Danny learns about history and gains the self-confidence to overcome dyslexia.

"I think all kids would like the book as it shows how different people can get along, how we can all respect our culture and sacred items, how we can save things from the past to help us all learn of our heritages and how children can also help preserve our past. This book is both exciting and informative ... I would rate Finders Keepers a five - that's a wow."