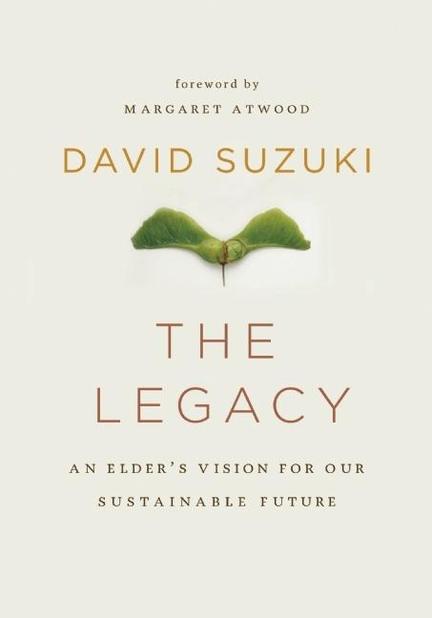 David Suzuki is one of the loudest voices in the global green community, and is surely the elder statesman of Canadian environmentalism. [He] adds to an already impressive body of work with The Legacy. —Quill & Quire

The expanded version of a lecture given by Suzuki in 2009, The Legacy is a discussion on population growth, technological developments and globalization, as well as the basic facts about existence: earth, air, fire and water. —Globe & Mail

The book reads as if Suzuki is speaking to you, taking you by the hand on a journey. —Green Living

With environmental crises facing the planet—climate change, ocean acidification and loss of biodiversity, to name a few—Suzuki says this is the time to act. The Legacy is part autobiography, part history, part basic science—and above all, a plea for the planet. Buy it. —National Post

The 'legacy' in this lecture is one of truthful words about the hard place we're in, but it's also one of hopeful words: our chance if we will take it for 'opportunity, beauty, wonder and companionship with the rest of creation.' My hope is that we ourselves will emulate David Suzuki and leave legacies in our turn. —Margaret Atwood

Readers . . . will find Suzuki's tangential musings on subjects like argon molecules, shrinking swordfish, or the role of salmon in fertilizing forests some of the book's best reading . . . at the core of his writing lurks a scientist's wonder at the world, and a compelling sincerity that makes you believe—or at least, want to believe—[there is] still some hope for this muddled planet. —Winnipeg Free Press

Occasionally we encounter someone who appeals to the better angels of our nature and reminds us of values we once held dear. For me that person was David Suzuki. It was a privilege and a joy collaborating with him on this project for the past two years and I take great pride in the result. —Sturla Gunnarsson

Suzuki locates his vision of natureís order even more deeply, as an 'elder,' in the healing resources of aboriginal wisdom . . . The imaginative reach of Suzuki's earth-vision grounded in scientific fact is astounding. Single sentences can change our perceptions of space and time ranging from the pre-Cambrian era to future millennia . . . to this reader, Suzuki's grasp of the magic, profound complexity of nature's underlying matrix is the strength of his new book. —Telegraph-Journal

Suzuki, one of the planet's best-known environmentalists, explains how earth got where it is today and presents his vision for a better future—The Legacy encapsulates Suzuki's thoughts, philosophies and hopes for a sustainable future. —Arabella Magazine

We should publish stories about the future we want, gets kids to write about the future they want. Then I realize I'm still holding on to The Legacy, and that my panic has been replaced by wild excitement, and I think, 'Thank you Dr. Suzuki. Thank you very much.' —Alternatives Magazine