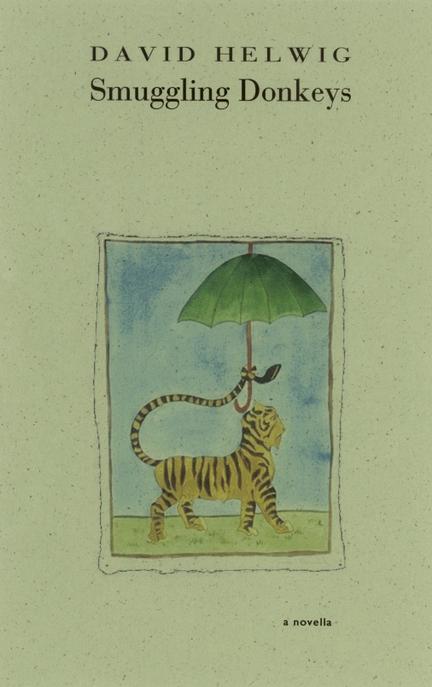 A retired teacher surviving a hard winter on memory and jokes finds that life still has surprises in store for him.

Born in Toronto in 1938, David Helwig attended the University of Toronto and the University of Liverpool. His first stories were published in Canadian Forum and The Montrealer while he was still an undergraduate. He then went on to teach at Queen's University. He worked in summer stock with the Straw Hat Players, mostly as a business manager and technician, rubbing elbows with such actors as Gordon Pinsent, Jackie Burroughs and Timothy Findley.

While at Queen's University, Helwig did some informal teaching in Collins Bay Penitentiary and subsequently wrote A Book About Billie with a former inmate.

Helwig has also served as literary manager of CBC Television Drama, working under John Hirsch, supervising the work of story editors and the department's relations with writers.

In 1980, he gave up teaching and became a full-time freelance writer. He has done a wide range of writing -- fiction, poetry, essays -- authoring more than twenty books. Helwig is also the founder and long-time editor of the Best Canadian Stories annual. In 2009 he was named as a member of the Order of Canada.

David Helwig lives in the village of Eldon on Prince Edward Island, where he is the third Poet Laureate. He indulges his passion for vocal music by singing with choirs in Montreal, Kingston, and Charlottetown. He has appeared as bass soloist in Handel's Messiah, Bach's St Matthew Passion and Mozart's Requiem.

'Smuggling Donkeys lacks nothing in largeness of thought or spirit. Helwig's sense of life's unpredictability/possibility grows more acute with each new book, and perhaps his novellas demonstrate this best. They are finely tuned explorations of flawed but redeemable human existence, intense and tender, buoyed by gentle humour and hope. And as the storyteller, he is a little like the 'comedian from silent film making you laugh and breaking your heart'. As Warren says of his new role in Tessa's play, ''Every single thing he tells the audience leaves out something else that there's no time to tell them or maybe no way to tell them,'' and yet we get it all: ''God's in his heaven, noticing things.' And Helwig, for whom it's about more than searching, continues to peel back the curtains, so that we too are noticing and truly seeing what's right under our noses.'

'I've begun my reading for the Canadian Book Challenge with a book set in my current home province, Ontario. This is a short novella (87 p.) but it's full of good reading. It is the story of Warren Thouless, a retired teacher whose wife has just left him to go to India as a spiritual seeker. He's sold off his house and most of his possessions, and has been convinced by a former drama student to purchase a deconsecrated church, to turn it into a theatre. The book is the tale of Warren's year alone in a drafty old church, trying to understand why his wife left, and trying to find his way back to a voice of his own. Despite the surface appearance -- a book about an old guy dumped by his wife, flirting with a young & attractive former student, selling off his stuff to live a young man's unencumbered life? Doesn't sound very appealing, does it -- despite this, it is a great read. With David Helwig I felt I was in good hands; he knows what he is doing. He controls the language of his character without faltering, turning out a masterful monologue. His insights are sharp, characterization exact, and he is also very funny.'

'...[T]he theatre is the passion of protagonist Warren Thouless. A retired history teacher who once gave up a chance to tread the boards at Stratford, Warren is in his golden years rediscovering a passion for the stage. His wife Laura has just left him to practice yoga in India, leaving Warren susceptible to the wiles of former student Tessa Niles, who convinces him to buy an old deconsecrated church and open a theatre for her. It is fitting that as Laura embarks on a spiritual quest, Warren in living in this symbol of faithlessness; in truth, he has given his spiritual self over to drama and the words of his favourite playwrights. Warren's thoughts are often derived from his heroes like Thornton Wilder, William Shakespeare, and Anton Chekov, and it a testament to Helwig's skill that this does not make Warren insufferable.'

... Smuggling Donkeys ...[has] an honest and truthful voice that makes Warren painfully real for the reader and maintains interest even when the story gets mired in Warren's self-loathing.'

'In the last few years, David Helwig, who lives in Prince Edward Island, has been quietly producing some of the best work of his lengthy literary career -- poetry, fiction, memoir. He's never more entertaining than he is in the novella form, and his three recent ones -- The Stand-In (2002), Duet (2004) and now Smuggling Donkeys -- are as funny and absorbing as anything you'll find in Canadian literature today.'

Other titles by David Helwig

A House in Memory

It Is Always Summer

The Names of Things