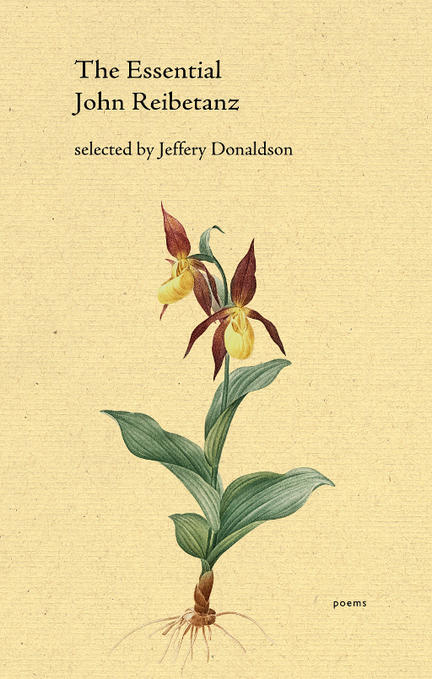 The Essential John Reibetanz provides a compelling view of the work of a deeply engaged poet whose exploratory syntax and probing imagery come together to form intense meditations on the nature of community and the transfigurative power of the imagination.

Jeffery Donaldson is the author of Palilalia, a finalist for the Canadian Authors Association Award for Poetry, Waterglass, and Once out of Nature. He has also the co-editor of Frye and the Word:  Religious Contexts in the Writings of Northrop Frye. Donaldson teaches poetry and American literature at McMaster University. He lives on the Niagara Escarpment near Grimsby, Ontario.

His love speaks the language of love
more lithely than the sage linguists.
Her lips and teeth negotiate
its iterative straits and twists
as fleet as neon pulsing through
the uncials and cursives of
the night's calligraphy.
Her love
speaks volumes with his hands, grasping
the branching, transformational
syntax and deep structure of
a dialect of rounded vowels.

Their love's a love of discourse held
in conversations where, amid
a theory of performance and
a generative grammar all
fricative and labial,
the tongue's licked into shape.

Angled approaches, revealing inner character one carefully chosen word at a time, are a Reibetanz specialty.

In the Porcupine Quill's wonderful collection The Essential John Reibetanz, exquisite poems focus on subjects both commonplace and unique.

John Reibetanz, an English professor at the University of Toronto, has published ten volumes of poetry; several of his poems have been featured in prestigious publications like Poetry and The Paris Review. A trim thirty are included here, and they comprise an impressive sampler and retrospective of Reibetanz's poetic career.

Dynamic from the start, the first poem, "Lewis Bolt, Farmer," portrays a man who's proud of the work he's achieved, though it hints at his nagging dissatisfaction and wanderlust. These angled approaches, revealing inner character one carefully chosen word at a time, are a Reibetanz specialty. The poem reads seamlessly, with rhymes and near-rhymes that amuse and delight along the way:

Old binder strong wound around nails rusted
Brittle; incredible the space wasted
By that and the other rubbish I cleared.

Reibetanz shows ambition in longer poems like 'A Chest of Angels' and 'Fresco Magic,' but most enjoyable are the works in which he takes a seemingly minor observed subject or detail and builds a world (and a poem) around it. In 'The Hammer,' passing a homeless man prompts thoughts about the man's mother; in 'Lincoln Logs,' a child's toy provides a powerful symbol of a boy's ability to survive; 'She Goes Like' studies a Hungarian girl who works to assimilate into North American culture, yet feels a connection to her roots through her parents. Reibetanz even waxes poetic about the creators of the Curious George children's books, a subject that might first seem whimsical, in 'Curious George Takes Flight, 12 June 1940.' This poem reveals that the character's red balloon is 'really his heart,' and Nazi Germany's 'yellow star of reproach' (creators H. A. and Margret Rey were Jewish) is transformed 'into wearable sun / the yellow hat of rescue.'

Whether they are drawn from his own personal history, someone else's, or are imagined entirely, key visual and emotional elements make every poem relatable in some way. Reibetanz remembers that wordplay and technique are elements, but not the only elements, of a good poem. Even shorter, simpler poems like 'Christmas Pageant' and 'June Light' bear his well-practiced slant rhymes, with a stanza from the latter reading 'freight accumulates, / letting the vessel / slip its moorings, gain.' Yet the two poems never lose their focus on the strong imagery of snow on branches and the sun on the ocean, respectively.

Reibetanz's pure poetic dexterity is electrifying, and spans such a wide range of human experience that The Essential John Reibetanz will satisfy any poetry lover, and perhaps even draw a few newcomers to the medium.

'The Essential John Reibetanz reveals a poet for whom it is essential to be other people. Poets tend to be ventriloquists, and Reibetanz revels in this role. From the Frostian dramatic monologue 'Lewis Bolt, Farmer' that opens the collection to a poem about Curious George on the run from the Nazis, we travel widely with Reibetanz's characters. What orients us is both a Romantic faith in the lyric's potential to expand our consciousness through the fleeting occupation of another's perspective and a deep understanding of the strange spaces memory makes for us to have been other people.'

Other titles by Jeffery Donaldson

The Evolution of Metaphor and the Metaphor of Evolution

Essays on Poetry and Poetics

Frye and the Word

Religious Contexts in the Writings of Northrop Frye