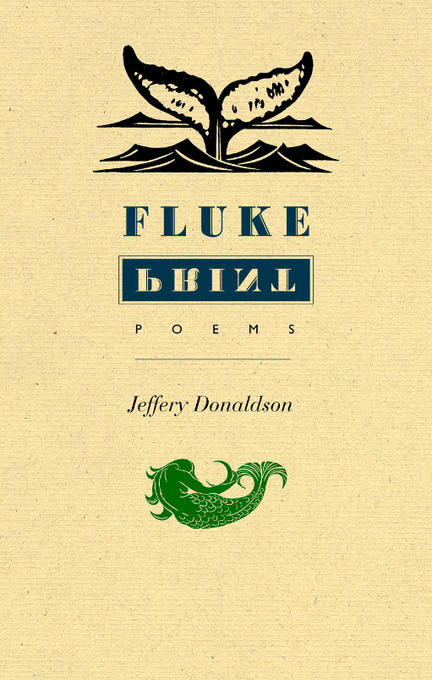 Jeffery Donaldson's Fluke Print is a collection of imprints, opposites and offsets-poetry that reflects on and reimagines creativity, emotion and intellect. For, as Donaldson writes, 'Both ends of this dull pencil have their say / and go together.'

Jeffery Donaldson is the author of Palilalia, a finalist for the Canadian Authors Association Award for Poetry, Waterglass, and Once out of Nature. He has also the co-editor of Frye and the Word:  Religious Contexts in the Writings of Northrop Frye. Donaldson teaches poetry and American literature at McMaster University. He lives on the Niagara Escarpment near Grimsby, Ontario.

Both ends of this dull pencil have their say
and go together. For when I try

the tapered point, finding I am led
to write before I die its darker things, instead

catch my eye ascending to the nub
(the nodding jester's blunt "ah there's the rub!")

that daubs above the dismal lines below
a flourishing "I would not have it so."

Dyslexic, mute, it holds - that subtle curse -
a mirror up to nothing, in reverse.

My aching slant, my least that can be said,
is followed backwards by a nulling thread,

a clear, upending scrub, as though the baser
word that everything must go

were giddily extinguished in the air.
What all I cannot say is written there.

Among our parsing, several moods
of selfhood, conjugated thus-
I am, you are, she is, word-chess
where grapple our twinned solitudes,

where all our spoked divergent lines
of empathy come to quarrel-
we seek a marriage of true Mines
in the first-person plural.

First person? Plural? We won't add up.
The pronoun buckles under weight.
Our one-for-two's an iffy trope,
dichotomous and incomplete

unless made whole by that pure is,
the metaphoric predicate,
whose blithe between-where synapses
can couple kinds, make this a that.

Sooner said than done. Lying alike
conjoined, subjects that in part agree,
we give it the old college try,
our both I's open, cheek to cheek,

and listen, knowing how, just when
you touch your inner, stranger half,
my me divides you from yourself,
but seeks you there, again, again.

How else to conjugate, or dance
our pas de deux of Her and His,
to merge and part, on the off chance
(however wrong) we is, we is.

Divided into three numbered sections, Jeffery Donaldson's Fluke Print explores writing, relationships, and heartbreak, always alert to the chance nature of what seems fixed. Poems are frequently voiced by a first-person speaker; there's a reflexive fixation in the speaker's gaze, perpetually attuned to what's present but also emphasizing a fundamental absence lurking just beneath the surface. Lyric, narrative, and formal, these poems display an agility that showcases technique while also serving as an emotional blind.

There's a insouciance sustained across the poems that belies the technical proficiency underneath. Dynamic line breaks, phrasing, and wordplay propel these poems forward. Many poems rotate around a central turn, such as the tension between a title or opening line and an extended metaphor or image continued through to the poem's resolution. Crafted to create movement, the poems compel a superficial energy that trips from line to line-even when, as stated in 'Uttoxeter,' they're poems that make 'nothing happen.'

Meta poems about words and the act of writing are frequent, and Donaldson's originality of expression reinvigorates the trope. While not every poem on the theme is successful, even the most pedestrian contain occasional lyrical surprises in their turns of phrase, like a fountain pen that spreads its 'blue privates.' One of the best poems in this vein is 'Poem Whisperer,' where the speaker addresses the poem in the second person using language reminiscent of courtship: 'My only trick was to make you / think my move was your move.' The speaker woos the poem with 'word of an apple,' beseeching it to 'Come nearer and taste it. / I promise not to put you down.'

Abstractions confound obscure expressions, as with 'Last Thinks,' a poem in twenty-one parts, which contains some of the collection's most moving, and most abstract, lines. In Section IV, an imagined dialogue with an absent ex-lover balances its abstractions with the luminous particulars of a closed door, a Tim's drive-through, and a cloud, when 'just being itself becomes / a burden, the way ahead clear.' In Section XXI, language is reduced to a shell in a shell game:

Would it have changed if we'd continued on,
made astringent feel like euphoria,
and learned how to make friends with lack?

Would we gain more than we already have
just by having it once more? It may be
looking forward to a remembered past

is loss's way of staying in touch. I choose
the poem that, out of love, will stop dead,
and leave the last thought that goes after you.

When lines state their emotions without embodying the speaker's emotional state, sentiment is exchanged for sentimentality.

Too guarded and abstract to be confessional and too personal to offer widespread insights, these poems stall in a middle ground. Variously glib, resistant, and melancholy, there's a poetic distance that rings of wariness amid concerns about the erosion and destruction of meaning in the speaker's world.

'Jeffery Donaldson's Fluke Print digs into the groundwork of poetry, examining and reimagining creativity, intellect, and the emotional landscape in poems that are subtle and precise, packed with quiet beauty and lines that land sure-footed and sharp. By calling into question our everyday assumptions, Donaldson mines simple scenes for complex emotion.'

Fluke Print, Jeffrey Donaldson's sixth collection of poetry, features highly intelligent and very moving poems about love, memory, loss, recollection, and human relationships. In the majority of these poems Donaldson poses questions about the relationship of time to reality. Time for us is composed of reverberating layers of past time. Time is tenuous, temporary. Time can be recalled, regretted. That time will not return does not make it unreal.

Other titles by Jeffery Donaldson

On Standing in Front of Art

The Evolution of Metaphor and the Metaphor of Evolution

Essays on Poetry and Poetics