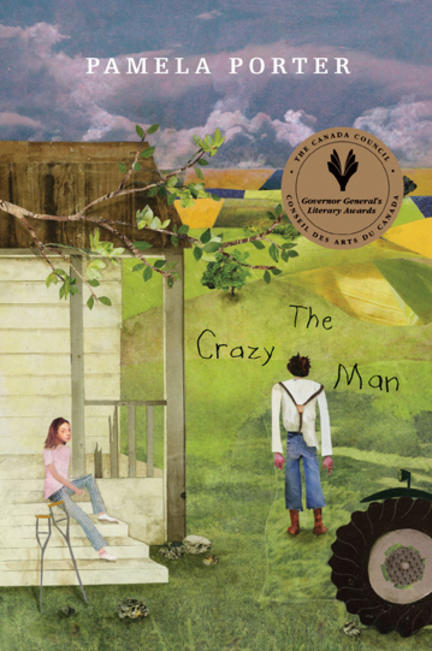 It is 1965, and twelve-year-old Emaline lives on a wheat farm in southern Saskatchewan. Her family has fallen apart. When her beloved dog, Prince, chased a hare into the path of the tractor, she chased after him, and her dad accidentally ran over her leg with the discer, leaving her with a long convalescence and a permanent disability. But perhaps the worst thing from Emaline's point of view is that in his grief and guilt, her father shot Prince and then left Emaline and her mother on their own.

Despite the neighbors' disapproval, Emaline's mother hires Angus, a patient from the local mental hospital, to work their fields. Angus is a red-haired giant whom the local kids tease and call the gorilla. Though the small town's prejudice creates a cloud of suspicion around Angus that nearly results in tragedy, in the end he becomes a force for healing as Emaline comes to terms with her injury and the loss of her father.

In the tradition of novels such as Kevin Major's Ann and Seamus and Karen Hesse's Out of the Dust, novelist and poet Pamela Porter uses free verse to tell this moving, gritty story that is accessible to a wide range of ages and reading abilities.

Among the pleasures of this novel are the muted longing in the young girl's expression, the explications of the 1960s definitions of crazy - and, perhaps most impressively, Porter's play with a verbal colour palette that tempts us to read this initiation narrative as impressionism, studied in its composite detail, and intelligently sentimental.

Powerfully told in poetic verse, this story is fast paced and heartfelt.

This...would be a valuable addition to young adult collections

The marvel of this novel is that language as plainspoken as Porter's can be as revelatory as those prairie plains themselves....Porter cultivates her characters and her plot with huge deftness and tenderness.

Subtle in its themes and organization, this book is pure pleasure, offering lessons about love, loyalty, and loss.

...[a] moving, gritty story...accessible to a wide range of ages and reading abilities. It is amazing how much emotion and character Porter manages to convey with so few words.

A richly written character study containing echoes of To Kill a Mocking Bird's Scout Finch and Boo Radley and Of Mice and Men's Lennie, The Crazy Man, which explores prejudices in many forms, is a quick read meriting several rereadings. Highly Recommended.

...a rich, full story of growth and questioning...

...a touching portrait of a real-seeming girl, set in a well-delineated time and place.

It’s no wonder that The Crazy Man won the Governor General’s Literary Award (Children’s Literature, English-language text). It’s a wonderfully written story, told in poetry, that exposes society’s view of mental illness. It also tells of the struggle that comes when families break apart, and the children are left to wonder if it was something that they had done.

Emaline is your typical Grade 6 girl, until an accident involving a tractor and the family dog leaves her with a severed leg. Although she doesn’t lose her leg, her father blames himself for the incident. While she is at the hospital, he shoots their dog and abandons his family. Emaline and her mother are left to tend their Saskatchewan farm on their own.

When none of the neighbours are willing to help, they hire Angus, a local resident from the mental hospital. The town doesn’t like it and they have no qualms about making life hard on poor Angus. This story will make you both angry and concerned, but it is in those moments when you laugh that you most see yourself in the people surrounding Emaline.

The way the townsfolk react to Angus is no differently than how we react to street people. Their fright is our fright. And yet, Angus is just a man who is as frightened by his mental labyrinth as we are.

Emaline’s devastated by a terrible farm accident, but healing comes about in unexpected ways. A moving story, told in free verse, that deals with loss, disabilities and hope.