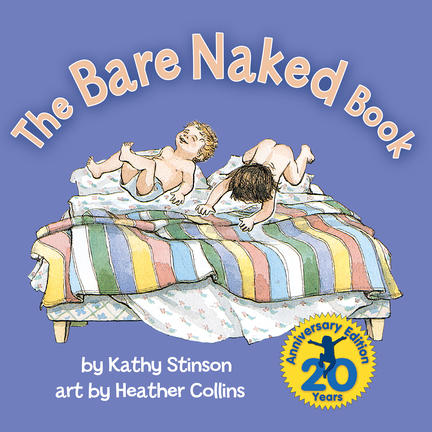 There is nothing more ordinary and more special than the human body. After all, everybody has one, and for all the parts that are the same each comes in a different shape and size. The Bare Naked Book joyfully celebrates this wonderful ordinariness with a matter-of-fact introduction for toddlers to the parts of the body.

From hair (dripping, straight, curly, and tangled) to toes (stamping, ticklish, skinny, and squishy) and the private bits in between, Kathy Stinson’s playfully simple prose identifies the parts of the body at rest and in motion. Meanwhile, the friendly realism of Heather Collins’s illustrations offers a variety of body types in familiar environments, from the bathroom to the beach.

Heather Collins brings Come Sit By Me alive with the colourful illustration style for which she has become known. Her popular children's picture book credits include Whoosh I Hear a Sound!, The Bare Naked and A Pioneer Story: The Daily Life of a Canadian Family in 1840 for which She won both the Information Book Award and the Ruth Schwartz Children's Book Award. When she's not illustrating in her attic studio in Toronto, Heather can be found spending time with her two children and her husband.

“Shows very clearly how each of us is essentially the same, even though we are each an individual. The positive feelings engendered about family will make this a firm favorite with another generation.”

“A good one for older toddlers and preschoolers.”

Other titles by Heather Collins

The Kids Guide to Fun in the Great Outdoors

Out Came the Sun

A Day in Nursery Rhymes

My Vacation Place: A Memory Book

Kids Book of the Night Sky, The

International Day of People with Disabilities