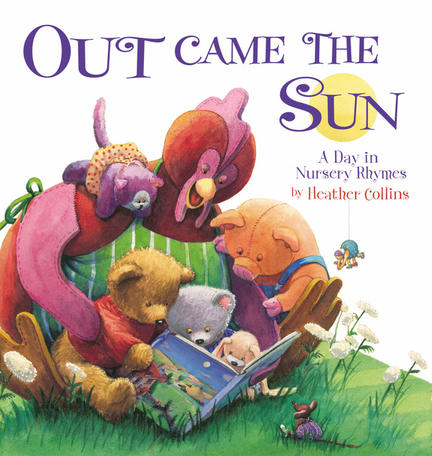 Out Came the Sun is a collection of nursery rhymes, thoughtfully selected and beautifully illustrated by Heather Collins. The rhymes tell the comforting and familiar story of a child's day: waking up, washing and dressing, eating, playing indoors and outdoors, and going to sleep. Following a day from sun up to sun down, the rhymes were also chosen for their rhythms, patterns and sounds --- to delight babies and toddlers, to make reading aloud fun and interactive for parents, and to encourage young children's engagement and response.

Familiar rhymes such as “Hickory, dickory, dock” and “I'm a little teapot” gain a new meaning in illustrator Heather Collins's story. From cock robin's lively waking up to the man in the moon's fond goodnight, more than 40 nursery rhymes follow a cuddly animal family through their day.

A feast for young eyes and ears, Out Came the Sun also encourages babies and toddlers to connect words, pictures and story --- an essential first step in learning to read.

Heather Collins brings Come Sit By Me alive with the colourful illustration style for which she has become known. Her popular children's picture book credits include Whoosh I Hear a Sound!, The Bare Naked and A Pioneer Story: The Daily Life of a Canadian Family in 1840 for which She won both the Information Book Award and the Ruth Schwartz Children's Book Award. When she's not illustrating in her attic studio in Toronto, Heather can be found spending time with her two children and her husband.

Although this catergory is a crowded one, the manageable size and good-natured fun make this volume stand out.

Out Came the Sun: A Day in Nursery Rhymes

“Exceptional” is a word I have rarely, if ever, used to describe a book in my 20 years of reviewing Canadian children’s books. But I wholeheartedly endorse Heather Collins’ illustrated anthology Out Came the Sun: A Day in Nursery Rhymes with this rating. From “cock robin got up early” on the first page to “the man in the moon” on the last, Collins’ collection rolls merrily through the land of childhood, a colourful place populated with cheerful toys. The rhymes are organized through the day’s activities of a family of more than 15 characters, huggable-looking stuffed-animal creations that might be found in a child’s toy box. Collins’s endearing depictions of a large, motherly red hen; a long-eared bunny; two adorable roly-poly pigs; fluffy teddy bears; a gay purple elephant and others members of the toy family will probably become part of beloved childhood memories.

Some books update the language of century-old nursery rhymes. Collins opts for traditional words of both well- and lesser-known poems, but this experienced illustrator successfully uses an intriguing ‘storyline’ approach to help young readers understand the poems of yesteryear. She places the poems in the order of what happens during the day, a sequence familiar to even the youngest readers. Children will giggle, but also draw meaning from visual cues as they witness the fun-loving toys making pease porridge at breakfast, then begging the rain go away at playtime and later boarding puffer bellies for a shopping in the village.

The index of first lines will help librarians quickly select story time treats from among the 45 rhymes. Another thoughtful feature is the ribbon page marker that will serve parents whose tots fall off to sleep mid-read. This book embodies what nursery rhymes are – invitations to play. Hopefully these invitations will be given to new parents at baby showers and made available on the shelves of many children’s libraries, so they can be explored at countless story times.

Out Came the Sun: A Day in Nursery Rhymes

Join cuddly characters as they merrily skip from one mini-adventure to another throughout a busy day. Artfully arranged to create an inviting visual story, 45 much-loved nursery rhymes come giggling and clapping to life through adorable watercolour illustrations.

Other titles by Heather Collins

The Kids Guide to Fun in the Great Outdoors

My Vacation Place: A Memory Book

Kids Book of the Night Sky, The