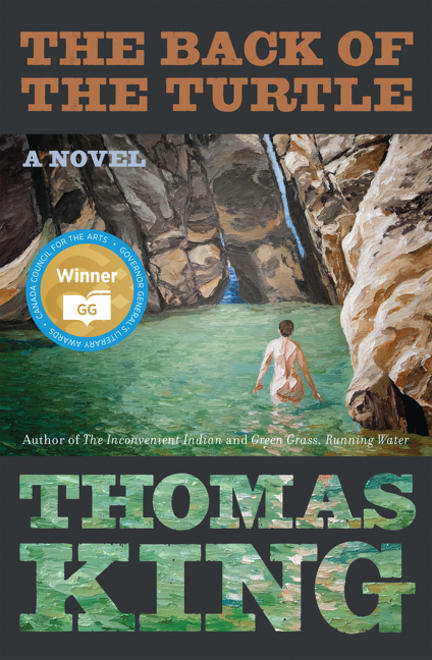 Winner of the 2014 Governor General’s Literary Award for Fiction!

This is Thomas King’s first literary novel in 15 years and follows on the success of the award-winning and bestselling The Inconvenient Indian and his beloved Green Grass, Running Water and Truth and Bright Water, both of which continue to be taught in Canadian schools and universities. Green Grass, Running Water is widely considered a contemporary Canadian classic.
In The Back of the Turtle, Gabriel returns to Smoke River, the reserve where his mother grew up and to which she returned with Gabriel’s sister. The reserve is deserted after an environmental disaster killed the population, including Gabriel’s family, and the wildlife. Gabriel, a brilliant scientist working for Domidion, created GreenSweep, and indirectly led to the crisis. Now he has come to see the damage and to kill himself in the sea. But as he prepares to let the water take him, he sees a young girl in the waves. Plunging in, he saves her, and soon is saving others. Who are these people with their long black hair and almond eyes who have fallen from the sky?
Filled with brilliant characters, trademark wit, wordplay and a thorough knowledge of native myth and story-telling, this novel is a masterpiece by one of our most important writers.

“Gracefully written, this is a fable-like morality tale. With King’s trademark flashes of humour, irony and deadpan delivery, The Back of the Turtle is populated with wounded characters who are trying to heal in the wake of an environmental disaster.”

“King’s writing is sharp, the characters are well-drawn, and his topic is suitably grave.”