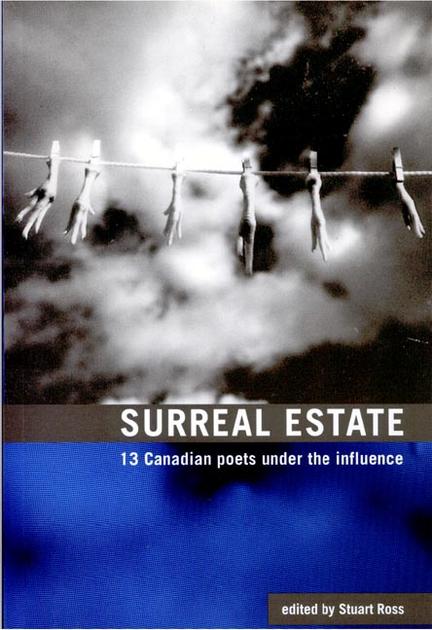 Surrealism may be a dirty secret these days, unmentionable on the backs of poetry books. But there are more than a handful of poets in North America who have been heavily influenced by surrealism. Some of them even consider themselves surrealists. They might have read Benjamin Peret, or they might have had a dream. Maybe they write while they have a fever. But, whether consciously or not, these poets are kicking at the tidy, the academic, the lyric. They are kicking at the mainstream of North American poetry.
This anthology brings together 13 Canadian poets under the influence of surrealism, including Gil Adamson, Kevin Connolly, Alice Burdick, and Lillian Necakov. Born in the 1960s and currently living in Toronto, Hamilton, Wolfville, Lunenberg, and Vancouver, they show that the influence of surrealism is still strong. There are imagist poems here, and language poems. Prose poems and manifestos. Things that could be called haiku.
Surreal Estate is an anthology of alternative universes, a record of a movement that doesn?t know it's a movement.
Surreal Estate includes work by Gil Adamson, Tara Azzopardi, Gary Barwin, Daniel f. Bradley, Alice Burdick, Kevin Connolly, W. A. Davison, Beatriz Hausner, Mark Laba, Lance La Rocque, Lillian Necakov, Stuart Ross, and Steve Venright.

Other titles by Kevin Connolly

by (author) Daniel Jones
introduction by Liz Worth & Kevin Connolly