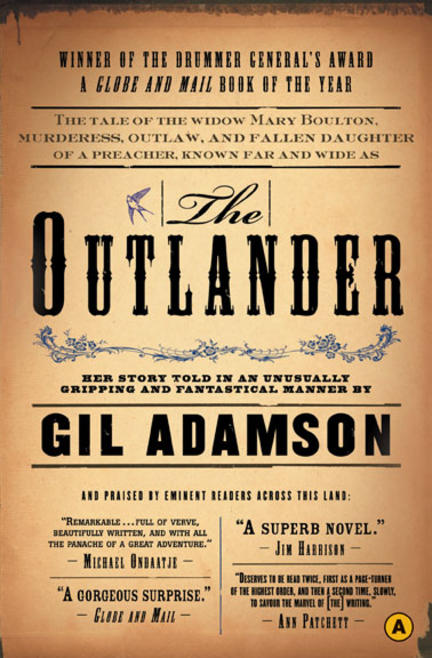 In 1903 a mysterious, desperate young woman flees alone across the west, one quick step ahead of the law. She has just become a widow by her own hand.

Two vengeful brothers and a pack of bloodhounds track her across the western wilderness. She is nineteen years old and half mad. Gil Adamson's extraordinary novel opens in heart-pounding mid-flight and propels the reader through a gripping road trip with a twist -- the steely outlaw in this story is a grief-struck young woman. Along the way she encounters characters of all stripes -- unsavoury, wheedling, greedy, lascivious, self-reliant, and occasionally generous and trustworthy. Part historical novel, part Gothic tale, and part literary Western, The Outlander is an original and unforgettable read.

...[a] compelling debut...lean prose, full-bodied characterization, memorable settings and scenes of hardship all lift this book above the pack.

The Outlander, a strikingly good first novel by the Canadian poet Gil Adamson...reads like a pastiche Western with elements of supernatural grotesquerie out of Stephen King or even The X-Files...The author writes well on the supernatural chill of the Canadian outback at nightfall.

...the prose hovers above the Earth, poetic enough not to land, but feeding off the grit....The Outlander is a dark wonder.

This is an old-fashioned adventure story - with a dark fairy-tale element.

For readers who want a cracking good story with unforgettable characters engaged in tension-filled activities, and told with a superlative richness of language and a lushness of imagery, Gil Adamson's novel, The Outlander, is it. Her widow, Mary Boulton, and Bonny, her Reverend, are the ideal stuff and stuffings of legends.

Throughout the novel, Adamson's keen eye for detail and mastery of language are much in evidence in her descriptions of the natural surroundings.

...[The Outlander] is a hallucinatory road novel - or, more accurately, trail novel - written in a chanting prose that's rich with wilderness description, physical adventure and barbed humor...Here's a novel that offers both an intense journey (Mary's) and a portrait of a specific time and place: the Canadian frontier...

In the tradition of Guy Vanderhaeghe, this is a dark novel with a long finish. It should age well.

[A] great read - a masterful combination of story and prose style.

Gil Adamson's first novel bolts off the opening page...An absorbing adventure from a Canadian poet and short story writer who knows how to keep us enthralled...The Girl Being Chased is one of the most enduring figures of chivalric and chauvinistic literature...a strikingly pensive novel, anchored by the stark beauty of its setting and the harsh wisdom of its narrator...Adamson is as captivating with descriptions of vast mountain ranges as she is with the smaller calamities...her story will unsettle your dreams just the same.

Gil Adamson's The Outlander is, simply enough, a superb novel and one senses in the fine writing the potential, or perhaps the eventuality, of a major writer. The frayed material of the North American west is rendered in astonishingly fresh light. The Outlander is also suspenseful to a degree that you are often in a state of physical unrest, a condition only occasioned by first-rate fiction.

One of those books so gorgeous in the writing that you simultaneously can't wait to read what happens next and want to savour the beauty of the writing.

The Outlander is a riveting tale of a woman's thirst for freedom.

As novels go, The Outlander should qualify for Great Canadian status...Described by author Gil Adamson herself as 'literary gothic western,' The Outlander is perhaps the only book of this genre, but it seems at home among such Canadian classics as Susanna Moodie's Roughing It in the Bush [and] Margaret Atwood's Alias Grace...

...the prose style of The Outlander is rich with natural details and metaphors. These descriptive ingredients are like cornstarch, serving to thicken the narrative and impart a glaze-like surface to the main dish. Because of its strong narrative line...and Adamson's...true poet's eye for metaphors and details that work, The Outlander is a superior example of the [Gothic] genre.

Striking, thoughtful, full of unexpected twists, The Outlander is that rare delight: a novel that is beautifully written yet as gripping as any airport page-turner...Adamson, a Toronto-based poet, must possess either an impressive collection of reference books or a powerful imagination - or both...This is a serious, literary book that moves far beyond genre or gender stereotypes.

...a gorgeous surprise of a book, unfairly neglected by prizes and pundits alike. Stylish and compelling, this novel about a woman's picaresque flight from and toward justice is both elegant in shape and exquisitely written. A powerful and wonderful imagination blossoms here.

The Outlander deserves to be read twice, first for the plot and the complex characters which make this a page-turner of the highest order, and then a second time, slowly, to savor the marvel of Gil Adamson's writing. This novel is a true wonder.

A novel that was completely overlooked by all the prizes and awards, but is mesmerizing and compellingly suspenseful...A picaresque tour de force.

...a great read. Adamson is an impressive stylist who knows how to keep [a]...story moving at a swift and graceful pace.

A remarkable first novel, full of verve, beautifully written, and with all the panache of a great adventure.

Gil Adamson has chiselled her characters, polished every word, and turned The Outlander into something magical...Adamson's characters are fully formed, described with nuances and details that make us feel that we really know them. And her writing is beautiful, poetic, descriptive, lyrical...This is a book that lingers in the mind long after the final page has been read.

I read this as part of CBC's Canada Reads for 2009. Westerns aren't usually my genre of choice but this one left a lasting impression. The imagery is strong and there is just enough suspense to keep you turning the page. The main character, 19-year-old Mary Bolton is very well written; complex and flawed but somehow relatable.
flag

This is a wonderful book, with sparkling writing and an enticing plot which hooks you from the first page. Adamson's powers of description are masterful - she is a Canadian Cormack McCarthy. I loved that the plot brought the heroine to historic Frank, Alberta and looked forward to the inevitable arrival of the landslide. This book is a keeper.

Books to stuff in your backpack

Women of the Year (by Suzanne Sutherland)