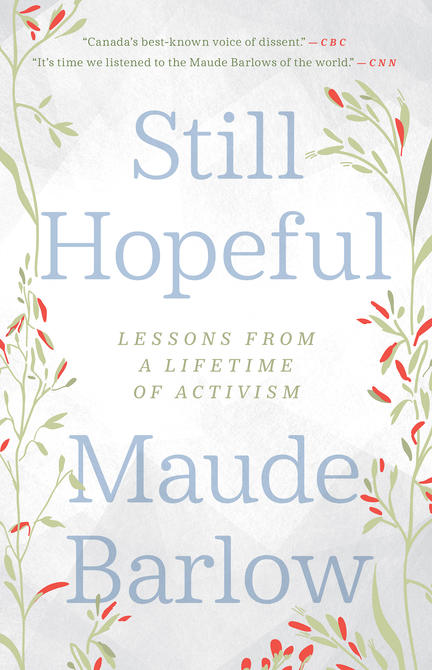 “It’s time we listened to the Maude Barlows of the world.” — CNN

In this timely book, Barlow counters the prevailing atmosphere of pessimism that surrounds us and offers lessons of hope that she has learned from a lifetime of activism. She has been a linchpin in three major movements in her life: second-wave feminism, the battle against free trade and globalization, and the global fight for water justice. From each of these she draws her lessons of hope, emphasizing that effective activism is not really about the goal, rather it is about building a movement and finding like-minded people to carry the load with you. Barlow knows firsthand how hard fighting for change can be. But she also knows that change does happen and that hope is the essential ingredient.

Excerpt: Still Hopeful: Lessons from a Lifetime of Activism (by (author) Maude Barlow)

I have been a social justice activist for over forty years and have found hope to be a prerequisite for creating change and inspiring others. Hope has been built into the DNA of my life.

I come from a family dedicated to social justice. My father was a pioneer in the field of criminal justice and led the fight against capital and corporal punishment in Canada. With our morning oatmeal, my two sisters and I were taught that we owed something back for the privilege of living in a place of such opportunity. We were taught that hope is a moral imperative, and it has been my lifelong mantra.

Recently, however, it has been getting harder to remain hopeful against the relentless tide of negative information that threatens to drown us in a sea of despair. It is hard to pass a day that we don’t read of more fires, hurricanes and drought; of the mass melting of the planet’s ice cover; of the sixth great extinction….

As well, we are entering a time of great economic uncertainty and devastating hardship for many millions of our fellow humans. Even before Covid exacted its terrible discipline, the UN announced that three quarters of the world’s workers are in precarious jobs, without pensions, security or even a livable wage.

The idea of this book came to me on a lovely June evening in 2019 in a packed Ottawa church. I was on a panel about the Green New Deal where each person spoke in language that I can only describe as apocalyptic, the message hammered home that there are only ten years left of a habitable planet. I noted that there were a lot of young people in the audience, including my 16-year-old granddaughter, Eleanor. In my presentation, I spoke of hope and about building movements.

After the event, a high school student came up to me in tears and thanked me, saying she and her friends had sat devastated throughout the panel discussion until I spoke. What could they do in the face of such overwhelming evidence of ecological collapse, she asked. On my walk home, the air fragrant with apple blossoms and lilac trees and the evening too lovely to feel anything but joy, I made a vow to help that young woman, and my grandkids, to find the path ahead.

How could I take what I have learned — including all the mistakes — and share it in a helpful way with others?

Standing under a newly leafed tree silvered by a new moon, I remembered the words of a PEI farmer friend who said that when he is overwhelmed, he stops thinking of the enormity of the challenges he is facing and instead, asks himself one simple question: what is the next appropriate step to take? Then he takes it.

Well, for me, the next appropriate step to take was to write this book. I offer it to you, with hope.

“We live in uncertain times in which the insatiable greed of the most powerful is leading us to unprecedented crises on multiple fronts, such as the climate crisis, the COVID-19 pandemic, and the inexorable bursting of the global financial bubble. While there is certainly no shortage of reasons for pessimism, in this book, Maude Barlow projects that supportive energy and rebellious, proactive intelligence with which she has inspired us throughout her life and which we need today more than ever. Thank you, Maude.” — Pedro Arrojo-Agudo, UN Special Rapporteur on the human rights to safe drinking water and sanitation

“In a world that is thirsty for good news, Maude Barlow delivers a delightfully refreshing book. Drawing on decades of experience campaigning relentlessly for clean water, social justice, and a better future, this is her most personal and most powerful book. I laughed, I cried, and I wished that Maude Barlow was Canada’s prime minister.” — Dr. David R. Boyd, UN Special Rapporteur on human rights and the environment and author of Thirst for Justice

“A refreshing take on the power of people-based movements … A worthy message from an iconic Canadian social justice activist.” — The Council of Canadians

“This book is so useful for the youth discouraged by the lies and unkept promises of the politicians of this world. A book where hope isn’t an abstract concept, Barlow gifts us concrete and real stories that can be only inspiring and worth sharing with readers.” — Rabble

“Maude Barlow’s latest book, Still Hopeful, does a masterful job of addressing this dilemma [hope]. She definitely does not buy into mindless optimism that humanity will certainly be able to address the multiple crises that we are facing, nor does she succumb to despair that we are helpless in the face of these existential challenges. Instead, we are treated to an eloquent and personal account of her experience of more than four decades as an organizer, activist, and writer in her fight against greed, patriarchy, pollution, and inequality, among other evils.” — Canadian Dimension

Too Close For Comfort