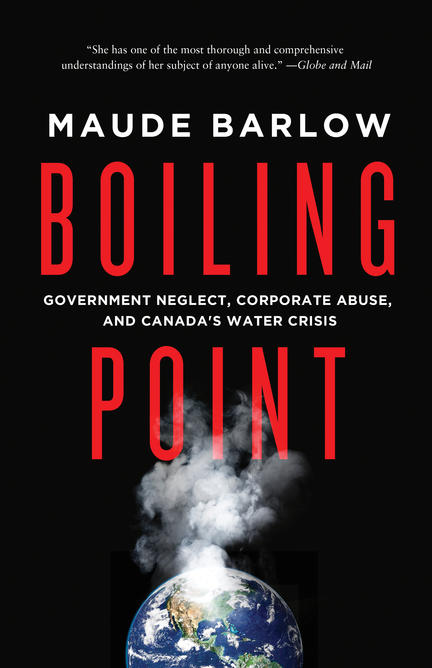 Passionate and cogent, this could be the most important book of the year for Canadians

We are complacent. We bask in the idea that Canada holds 20% of the world’s fresh water — water crises face other countries, but not ours. We could not be more wrong. In Boiling Point, bestselling author and activist Maude Barlow lays bare the issues facing Canada’s water reserves, including long-outdated water laws, unmapped and unprotected groundwater reserves, agricultural pollution, industrial-waste dumping, boil-water advisories, and the effects of deforestation and climate change. This will be the defining issue of the coming decade, and most of us have no idea that it is on our very own doorstep.

Barlow is one of the world’s foremost water activists and she has been on the front lines of the world’s water crises for the past 20 years. She has seen first-hand the scale of the water problems facing much of the world, but also many of the solutions that are being applied. In Boiling Point, she brings this wealth of experience and expertise home to craft a compelling blueprint for Canada’s water security.

“An insane road trip to the Canadian water apocalypse courtesy of the corporate forces of ignorance and greed, and a blueprint for a rational, prosperous and dignified future by the visionary prophet of democracy and sustainability.” — Robert F. Kennedy Jr.

“Maude Barlow is one of our planet’s greatest water defenders. In this indispensable book, she brings her hard-won wisdom home, demonstrating that Canada is already in the midst of our own water crisis. With great warmth and precision, she also shows that by taking up the call for ‘water justice’ — so intimately connected to other struggles — we can start to build the society we want. This book has all the facts, forceful analysis, and moral clarity that Canadians will need to wake up and join this most urgent of struggles.” — Naomi Klein, author of This Changes Everything and The Shock Doctrine

“Barlow's documentation of the very real threat to the global water supply is important reading as Canada faces key end-of-year deadlines regarding new pipeline development and meeting the targets of the Paris climate agreement.” — Quill & Quire

“Barlow gives us more than a wakeup call. She gives us a call for action — now!” — Canadian Association of Labour Media

“Barlow concludes on a hopeful note, providing reasonable solutions that show how a ‘blue and just Canada is possible.’ She understands, however, that while most large corporations will do almost anything to increase profits, the primary responsibility for protecting citizens lies with governments at all levels. Barlow makes a convincing case that both our provincial and federal governments are failing this fundamental duty.” — Vancouver Sun

Lessons from a Lifetime of Activism

Too Close For Comfort

Passionate and cogent, this could be the most important book of the year for Canadians.