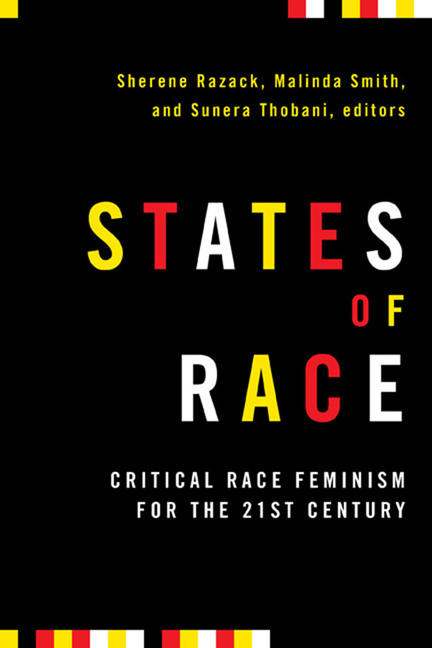 Sherene Razack is a full professor in the Department of Social Justice Education, at the Ontario Institute for Studies in Education of the University of Toronto. She has published At the Limits of Justice: Women of Colour On Terror (2014, ed. With Suvendrini Perera); States of Race (2011, co-editor with Malinda Smith and Sunera Thobani); (2008) Casting Out: Race and the Eviction of Muslims From Western Law and Politics; (2004) Dark Threats and White Knights: The Somalia Affair, Peacekeeping and the New Imperialism. (2002, Editor) Race, Space and the Law: Unmapping a white settler society. Toronto: Between the Lines;(1998) Looking White People in the Eye: gender, race and culture in courtrooms and classrooms; (1991) Canadian feminism and the law: The women's legal education and action fund and the pursuit of equality. She is a founding member of Researchers and Academics of Colour for Equality.

Malinda Smith is an Associate Professor in the Department of Political Science, University of Alberta.

Sunera Thobani was born in Buboka, Tanzania. She came to Canada in 1989. Thobani helped organize against to opening of sex selection clinics in British Columbia and was a founding member of SAWAN (South Asian Women's Network). She was elected president of the National Action Committee on the Status of Women (NAC), the largest feminist organization in Canada, in 1993. She is a single mother.

“?With theoretical sophistication and analytical brilliance, this collection is essential reading that provides readers with critical tools to understand the relation between Canadian (and North American) racisms, neoliberalism, and the “War on Terror.” These eight essays incisively reveal the multiple, interconnected, and transnational projects of racism through a critical race feminism that is an exemplary practice of solidarity, coalition, and critique.?”

“States of Race will be useful for those already knowledgeable about the subject, as well as for novices. [It] is a valuable resource for anyone interested in critical race feminism and its application in a Canadian context.”

“A refreshing and thoughtful collection that explores a range of realities faced by women and feminists of colour?. The editors and contributors have interwoven critical race and transnational feminism, post-structuralist feminist theory, and philosophy to offer incisive analyses on a range of current topics of interest to all critical thinkers across the globe. This volume — subtle, illuminating and accessible — should be required reading for students and faculty in critical race theory, women's studies, and political and feminist philosophy courses.”

Other titles by Sherene Razack

The Art of Public Mourning

Inquests and Inquiries into Indigenous Deaths in Custody

At the Limits of Justice

Women of Colour on Terror

At the Limits of Justice

Women of Colour on Terror

The Eviction of Muslims from Western Law and Politics

The Somalia Affair, Peacekeeping, and the New Imperialism

Looking White People in the Eye

Gender, Race, and Culture in Courtrooms and Classrooms

Canadian Feminism and the Law

The Women's Legal Education Fund and the Pursuit of Equality

Other titles by Malinda Smith

Other titles by Sunera Thobani

Coloniality and Racial (In)Justice in the University

Studies in the Making of Race and Nation in Canada

The Court of Women - Writings by Women of South Asian Origin