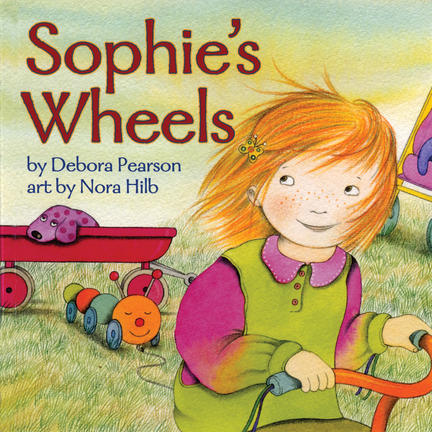 When Sophie is born, her parents and brother take her out in a bouncy buggy. At first, Sophie stays curled up all cozy inside, but soon she can sit up and smile at the world. Before you know it, she’s moved up to a stroller, then a tricycle.

With each new set of wheels, Sophie discovers new things to see and new ways to see them. Low-riding strollers are great for bug spotting. Snow-bound wagons are no match for zippy sleds. Eventually big girl Sophie is riding a bike on her own, all the way around the corner and then back to her cheering family.

The talented team that brought you Leo’s Tree returns with this rhythmic tale of Leo’s little sister. Children will delight in Sophie’s freewheeling antics as illustrated by Nora Hilb and in the catchy cadence of Debora Pearson’s writing that keeps the story rolling along.

Deborah Pearson, a former children's librarian for the Toronto Public Library, is an award-winning author and editor. She lives in Toronto.

“...[An] enjoyable way to portray the growth of a child. Nora Hilb’s bright watercolours are uncluttered but contain details that expand the text. Children from ages 3 to 6 should enjoy listening to Sophie’s Wheels, looking at the pictures, and discussing the art and text. Recommended.”—CM Reviews, 10/06

“... a celebration of growing up ... sure to delight toddlers and those just learning to read. Clear bright watercolor pictures immediately entice you to explore this book.”—Resource Links, 12/06

“This satisfying, peaceful title celebrates a youngster’s growth from dependency on others to taking a big trip around the block on her own.”—School Library Journal, 03/07

Other titles by Debora Pearson

Make Numbers And Shapes You Can Munch

When I Went to the Library