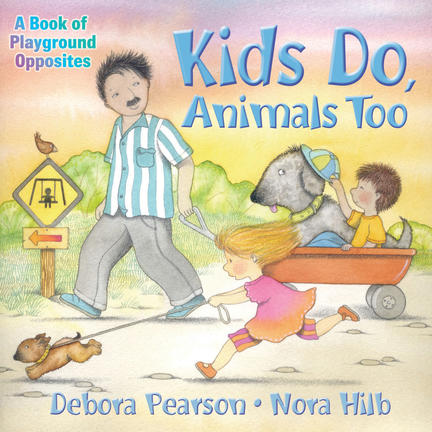 Opposites are everywhere in our world. Spend a day at the park and you’re sure to spot busy kids and active animals acting out opposites pairs wherever you look.

There, on the slide: Sam goes up as Hiroko zips down. And there, in the tree: one squirrel climbs up and another scurries down. Not far away, Daddy is quiet but Simon is LOUD while a mother bird is silent as she feeds her chirping babies.

Jump in to Kids Do, Animals Too and check out ten pairs of opposites. Each pair features people and a different animal, including:

Deborah Pearson, a former children's librarian for the Toronto Public Library, is an award-winning author and editor. She lives in Toronto.

“The concepts of slow and fast, in and out, up and down, on and off, among others, are explored in word and gentle watercolors in this book.” —Globe and Mail, 11/05

“... an excellent introduction to the idea of opposites for very young children. Parents, grandparents, librarians and early childhood educators will find this a positive addition to their bookshelves.”—Resource Links, 02/06

Kids Do, Animals Too: A Book of Playground Opposites

An innovative opposites book that matches children’s actions with animals’ activities, all at the playground.

Other titles by Debora Pearson

Make Numbers And Shapes You Can Munch

When I Went to the Library