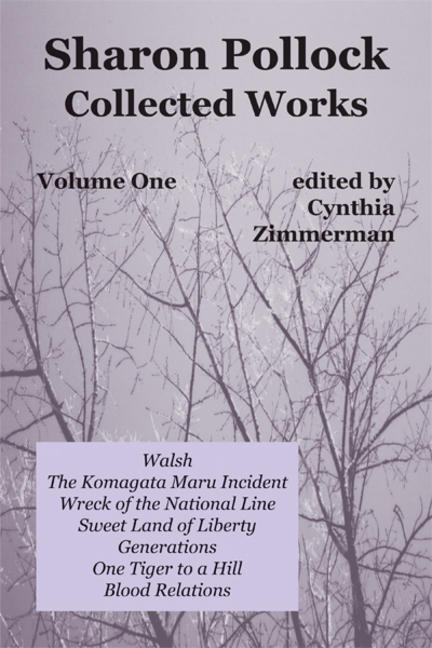 Sharon Pollock is Canada's best-known woman playwright. Produced nationally and internationally, author of a large and varied canon, she has had a long and illustrious career in the theatre. From backstage to onstage, from front of house to director's chair, from actor to author, from teacher and mentor to artistic director of venues both large and small, Sharon Pollock remains an active, controversial, and prolific participant in the Canadian theatre scene.

Sharon Pollock
Sharon Pollock was born Mary Sharon Chalmers in Fredericton, New Brunswick, in 1936, where she first became involved in the theatre in university. Later, with the Praire Players, she toured British Columbia and Alberta in 1966, and was voted Best Actress at the Dominion Drama Festival. She settled in Calgary the next year, raised a family, and while pregnant with her sixth child she began writing her first play. In 1973, Walsh (1983) premiered at Theatre Calgary. A subsequent production in 1974 at the Stratford Festival brought Pollock’s writing to wide public attention. She has written many plays, including Blood Relations and Other Plays, which won the Governor General’s Award in 1981, and Doc (1985), which won the Governor General’s Award in 1986.

Other titles by Sharon Pollock

Other titles by Cynthia Zimmerman

Song of This Place