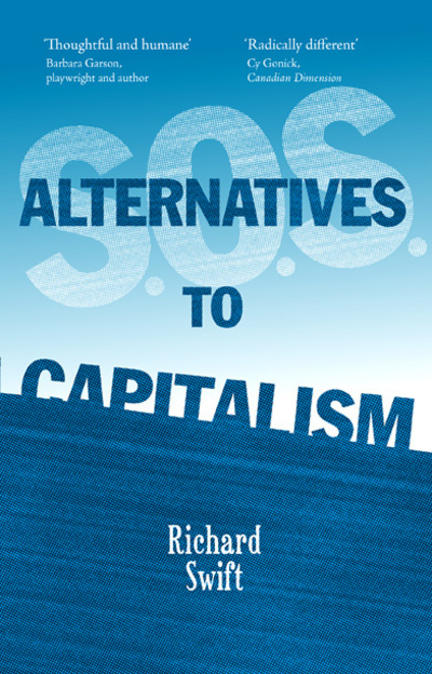 Financial collapse and crisis; disgust at bankers’ greed; the devastating effects of yawning inequality: all these and more have led to widespread dissatisfaction and disenchantment with capitalism. People are crying out for an alternative but are continually told that one does not exist.

Richard Swift proves this to be wrong with style and assurance. With capitalism vulnerable and out-of-step in the wake of financial crises this book investigates the alternatives that are on offer—including socialism, social democracy, anarchism, ecology and degrowth.

Combining the practical with the visionary, he shows that finding alternatives to capitalism is no longer an academic issue for the left – it is an urgent planetary necessity.

This is a book that should not only be read but also seriously contemplated by all who are concerned about the present state of affairs.

“I came away from S.O.S. with the comforting sense that there was an enjoyable world before capitalism and there can be one after.”

Barbara Garson, playwright and author of Down the Up Escalator: How the 99% live

“Swift guides his reader through a troubling political history of 20th Century capitalism and its stunted alternatives. He then explores ways out of our death trap known as business-as-usual. A genuine invitation to both dream and recover from a nightmare.”

“Richard Swift’s thoroughly researched and timely book takes a much-needed view of the alternatives that existed - and still exist - beyond capitalism.” Jaideep Hardikar, journalist and author of A Village Awaits Doomsday

Jaideep Hardikar, journalist and author of A Village Awaits Doomsday

“Commendably judicious... With S.O.S.: Alternatives to Capitalism, Swift joins a growing strand of 21st-century literature that explores radically different ways of organizing our economy and politics.”

How to Stop the Tax Cut Scam and Save Canada

edited by Richard Swift
as told by Canadians for Tax Fairness