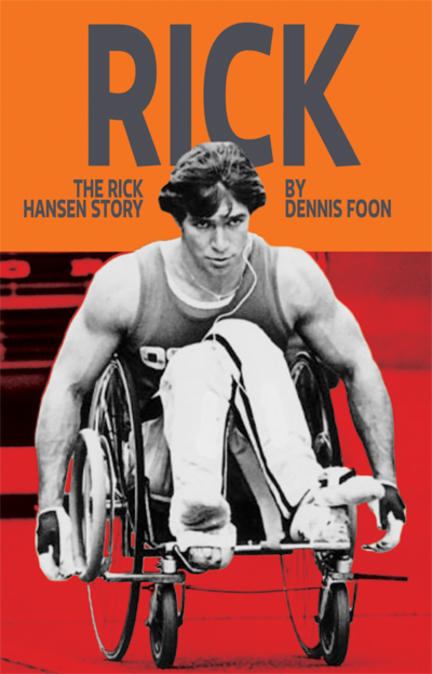 Fifteen-year-old Rick Hansen is confident, outgoing, and the star of his high-school basketball team. He has his whole life planned out, until a tragic accident severs his spinal cord, leaving him in a wheelchair. Rick's accident forces him to adapt his positivity to deal with his new life, while helping to strengthen the relationship with his guilt-stricken best friend. Refusing to be put at a disadvantage, Rick conquers the challenges presented to him with a smile and changes the definition of what it means to be disabled. Based on the true story of the man who inspired millions with his Man In Motion World Tour, Rick is a triumphant play that showcases the importance of optimism and perseverance, encouraging audiences to make their own paths to change the world.

"Everything about Rick just feels right… A shining example of theatre for young audiences." —Peter Birnie, The Vancouver Sun

The first two books being discussed in this issue’s column are from Canadian playwrights. One is the story of Rick Hansen written by Canada’s acclaimed playwright Dennis Foon and the second is a collection of six plays from Canada’s acclaimed Green Thumb Theatre in Vancouver which was co-founded by Foon. Both books contain plays that will educate and empower young people who read, act in or view these performances.

In Rick: The Rick Hansen Story by Dennis Foon, Act One begins with Rick in high school, a fit and athletic teenage boy who loves to fish, play basketball and hang out with his buddies. We also meet Don, a new kid in school who likes to play guitar and Barry who, according to Rick, is a bit thick but a lot of fun. When the boys go away for a few days to fish, an accident occurs and Rick is thrown from the back of a pick-up truck. The first act ends as Rick is rushed to hospital and into the operating room.

The second act deals with the emotion and devastation that both Rick and Don deal with following the accident. Rick must learn to deal with his spinal cord injury and the impact that will have on his life and Don must deal with the guilt he feels. With the help of friends, family and teachers, Rick becomes more hopeful and optimistic as he learns to accept and appreciate the possibilities for his future and he urges Don to forgive himself and become everything he can be. In the epilogue, Don tells us how both their lives turned out and we learn that Rick wouldn’t change a thing given the chance.

This play will resonate with young people due to the fact that Rick Hansen’s accident occurred in his teen years and this is the time period that Dennis Foon has chosen to write about. Teens will be able to see how Rick’s choices at the time led to the outcomes he experienced. Yes, his choice to ride in the back of a truck led to a life-changing accident, but more importantly his choice to move forward from there and embrace the challenges he faced is the more important message kids can take away from this play. It sends out a positive message to kids and encourages them to make a difference.

Fifteen-year-old Rick Hansen is the star of his high school basketball team, until an accident severs his spinal cord, leaving him in a wheelchair. His accident forces him to adapt and deal with his new life. Refusing to be put at a disadvantage, Rick conquers the challenges presented to him and redefines the meaning of disabled. Teachers, from middle school to high school, can use this book to support their classroom drama program or create a production piece for a school concert.