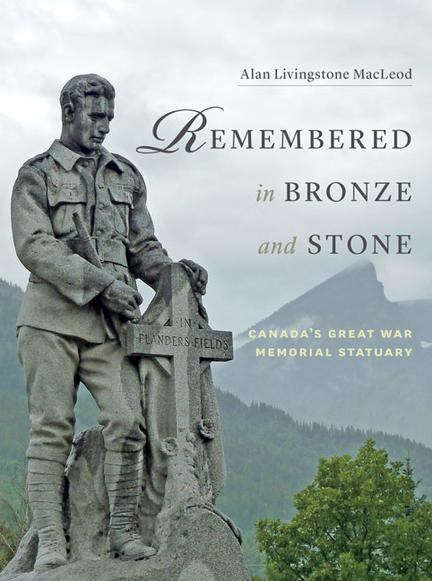 Remembered in Bronze and Stone evokes the years immediately following the First World War, when grief was still freshly felt in communities from one end of Canada to the other. This book tells the story of the nation’s war memorials—particularly bronze or stone sculptures depicting Canadian soldiers—through the artists who conceived them, the communities that built them, and, above all, those who died in the war and were immortalized in these stunning sculptures raised in their honour. A century has passed since Canadians were scarred by the loss of more than sixty thousand sons and daughters, who now lie in faraway battlefield graves. Highlighting more than 130 monuments from coast to coast, Remembered in Bronze and Stone revives a pivotal period in history that changed Canada forever.

Alan Livingstone MacLeod has a lifelong passion for history, hockey, and writing. Since retiring from the field of labour relations, he has transformed his passion into two books ( Remembered in Bronze and Stone: Canada's Great War Memorial Statuary and From Rinks to Regiments: Hockey Hall-of-Famers and the Great War) and a number of public lectures commemorating Canadian efforts in the First World War. He divides his time between Cape Breton, Nova Scotia, and Victoria, BC.

David Macfarlane is the author of the acclaimed family memoir of Newfoundland, The Danger Tree, which won the Canadian Authors Association Award for Non-Fiction in 1992. He began his career as a writer and editor with Weekend Magazine and has since been published in Saturday Night, Maclean's, Toronto Life, and Books in Canada. He is the recipient of eleven National Magazine Awards, the Sovereign Award for Magazine Journalism, an Author's Award for Magazine Writing, and a recent national newspaper award for his weekly column in The Globe and Mail. He has written and produced a documentary and won a Gemini for his television work. In 1999, Summer Gone was nominated for the Giller Prize and in 2000 it was the co-winner of the Chapters/Books in Canada First Novel Award.

In Remembered in Bronze and Stone, Alan Livingstone MacLeod presents a remarkable look at the many ways we honoured our war dead, and he explores the symbolism found in these often lonely monuments.

Moving memorials of a horrifying war.

In the aftermath of a world torn apart by war, countless communities across Canada sought to pay tribute to their fallen by erecting war memorials intended to serve as a syumbol of eternal remembrance. Through his insightful writing and often hauntingly beautiful photography, Alan MacLeod traces the story of the soldier statuary these efforts left behind. Remembered in Bronze and Stone is a fine tribute and a call to current and future generations to ensure the preservation of these memorials.

Mark Zuehlke, author of the Candadian Battle Series and Through Blood and Sweat

Other titles by Alan Livingstone MacLeod

From Rinks to Regiments

Hockey Hall-of-Famers and the Great War

Other titles by David Macfarlane

The Figures Of Beauty

Painting the Canvas of a City