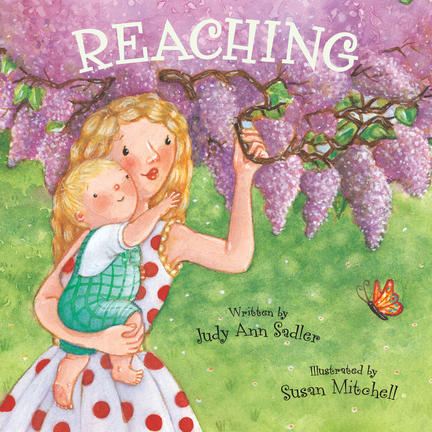 This soon-to-be-classic picture book centers on a large, adoring family with a new baby to love. Rhyming couplets describe different scenes, each built around the simple human gesture of “reaching.” A new mother reaches up to hold her laughing baby aloft. Dad reaches over to tickle Baby's toes as the family lounges on a picnic quilt. Grandparents, cousins and other family members reach out to play and cuddle with the growing child. The little one also gets to “reach,” using his arms and hands to explore the wonderful world around him as he grows from a baby into a curious toddler. It's only a matter of time (Mom realizes wistfully) before he's “reaching” for the stars. Splendid, lush illustrations will immerse babies and toddlers in the story's beautiful, colorful world.

Ever since she could remember, JUDY ANN SADLER has loved to read, write, and make things. When her kids were little, she decided to combine her love of words and crafts by writing craft books. Along with over twenty craft books, Judy Ann has written picture books, dozens of craft columns, and numerous magazine features. Judy Ann lives with her family in London, Ontario.

Susan feels very fortunate to work full-time as an illustrator, with 18 published titles, including Reaching with Kids Can Press. When she is not drawing or painting, she loves to sew and make soft toys that resemble her illustrations. She also loves to visit schools to talk about her illustration process and hopes that she inspires some children to become illustrators when they grow up.

Ultimately a book that many new parents will reach for as they revel in their love of baby.

Who knew that the word “reach” could mean so much? At a family gathering, Baby experiences several variations of the word. Mama reaches to hold Baby in the air. Daddy reaches to kiss Baby’s nose and give him a tickle. Sister, Grandparents, Aunt, Uncle and Cousins all reach out to Baby in different ways, be it by hugging, rocking, playing or reading. Even the family dog wants in on the action! And then it is Baby’s turn to “reach” as he takes his first tentative steps and explores his world with curiosity and a glimmer of independence. At bedtime, however, Baby is once again ensconced in the loving arms of his parents who wistfully reflect that it will only be a matter of time before he is reaching beyond them for the moon and the stars. But for now, they are grateful that Baby is still theirs.

Judy Ann Sadler has written a touching tribute to the bonds of family love. Through lilting, rhyming verses, an assortment of affectionate “reaching” interactions between Baby and his relatives are described: “Grandma is reaching /Scoops Baby from Mum/ She dips him, they dance/She rocks him, they hum.//Grandpa is reaching /His arms become reins/He plays horsey with Baby/ — They do it again!”

Susan Mitchel’s watercolour illustrations depict the warmth and serenity of an idyllic summer afternoon, where a family of different generations revel in the joy of being together with a much-loved toddler. There are many familiar items in the artwork that any young reader would love to look at, be it a balloon, a cake, a puppy or a stuffed toy.

Children and parents will want to reach for Reaching over and over again!

Told in gentle rhyming verse, this is the story of a baby and his family as they laugh, play and celebrate being together. Join baby as he cuddles with his mom, dad and sister, dances with his grandma, plays horsey with his grandpa and reads his favourite book with Great-gran. Endearing watercolour illustrations will delight both young and old.

Other titles by Judy Ann Sadler

Nothing Happens in This Book

Jumbo Book of Needlecrafts, The

Other titles by Susan Mitchell

A Watery World of Wonderful Creatures