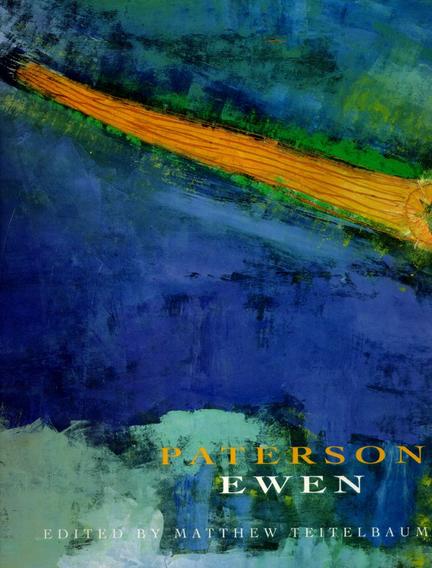 Paterson Ewen is one of Canada's most accomplished and admired painters. He is famous for his monumental paintings of phenomena, powerful works that capture the grandeur of nature and extend the tradition of landscape painting in Canada. According to Michael Ondaatje, "Perhaps there is a balance and security in these precarious works because of the very fact that they seem to have been torn out of the heart and earth."

Born in Montreal in 1925, Paterson Ewen was heralded as one of the leading modern artists in Quebec. In 1968, he moved to London, Ontario, where he still lived and worked at the time of publication. Ewen's work is in the collections of most public art institutations in Canada and has been exhibited widely in North America and Europe. He was chosen to represent Canada at the 1982 Venice Biennale, and his numerous honours include the Chalmers Award for Visual Arts and the Toronto Arts Award.

This beautifully produced volume presents a selection of Ewen's most important works (50 in full colour and 72 in black and white), as well as four texts celebrating a career that spans six decades.

Michael Ondaatje's introduction reflects on the act of making art and is rooted in his response to Ewen's works. Ron Graham's biographical essay presents much new information on Ewen and his community of artists in Montreal and London. Matthew Teitelbaum's critical essay examines Ewen's career, his development, influences and achievement. Eric Fischl's afterword offers a personal view of his friendship with Ewen.

This book was published in partnership with the Art Gallery of Ontario.

Matthew Teitelbaum, Director of the Art Gallery of Ontario and formerly curator at The Institute of Contemporary Art in Boston, MS, has organized a range of Canadian and international exhibitions including Paterson Ewen: Early Weathers/Heavenly Skies (AGO) in 1996.

Ron Graham is a best-selling Canadian author, whose books include The French Quarter, One Eyed Kings, and In God's Dominion.

Eric Fischl, the celebrated American figurative painter, was a colleague of Paterson Ewen when both taught at the Nova Scotia College of Art and Design in the late 1970s.

Other titles by Matthew Teitelbaum

Art of Betty Goodwin, The

Other titles by Ron Graham

The History of Canada Series - The Last Act: Pierre Trudeau

The Gang Of Eight And The Fight For Canada

Straight from the Heart