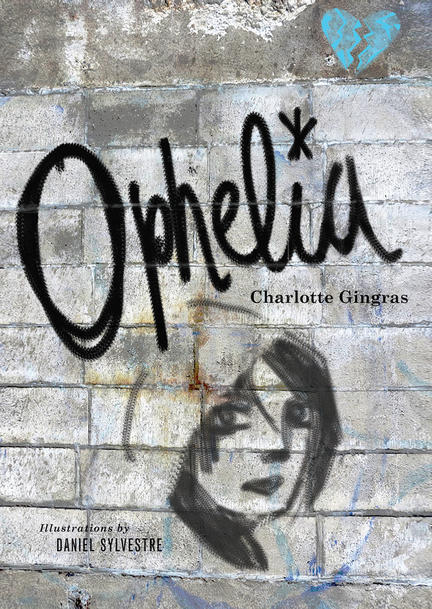 “...explore how painting, writing, and building things with your hands can be the outlet that helps a person get through the hell that is high school.” — Quill & Quire

The kids at school call her rag girl because she hides under layers of oversized clothing, but she calls herself Ophelia. She hardly speaks to anyone — until one day a visiting author comes to give a talk in the school library. The writer speaks about what it means to create art, and at the end of her talk, she thanks Ophelia for asking the first question by giving her a blue notebook with her address on it.

Ophelia starts to write to the author in the notebook — letters that become a kind of lifeline. The idea that someone, somewhere, might care, is enough for her to keep writing, an escape from her real life. By day she goes to school and works at the dollar store before returning home to her mother, a former addict who once had to put her daughter in care. At night she creates graffiti around town, leaving little broken hearts as her tag.

One night she finds an abandoned building that she decides to use as her workshop, where she can make larger-than-life art. When she finds that a classmate, an overweight boy named Ulysses, is also using the space to repair an old van, the two form an uneasy truce, with a chalk line drawn down the middle to mark their separate territories. As time passes, Ophelia and Ulysses forge a fraught but growing friendship, but their cocooned existence cannot last forever. One night, intruders invade their sanctuary, and their shared bond and individual strength are sorely tested.

CHARLOTTE GINGRAS is a former teacher and visual artist, and she remains one of Quebec’s best-loved authors of works for young readers. Her books have been translated into several languages, and she has twice won the Governor General’s Literary Award, for La liberté? Connais pas… and Un été de Jade, which also won the Mr. Christie’s Award.

A well-known illustrator, graphic artist and engraver, DANIEL SYLVESTRE has illustrated several albums and novels, and he has been artistic director of the poetry collection at la courte echelle. His illustrations for Rose: derrière le rideau de la folie by Èlise Turcotte won the Governor General’s Award in 2010, and his illustrations for Ma vie de reptile by Sylvie Massicotte were shortlisted for the Governor General’s Award in 2007.

Christelle Morelli is a French-English literary translator and teacher in the Francophone school system. She has translated the anthology Languages of Our Land: Indigenous Poems and Stories from Quebec and the children’s book Blanche Hates the Night. She has also co-translated 15 fiction, non-fiction and children’s books with Susan Ouriou. Her French to English co-translations other than Winter Child are: Against God, Sand Bar, Jane, the Fox and Me, Millions for a Song, Once Upon a Rainy Day, Stolen Sisters, Louis Undercover and Hunting Houses. Her English to French co-translation titles are: La toute dernière première fois, Chin Chiang et la danse du dragon, Lune jaune, à bientôt, Le chandail d’Amos, Une musique du ciel, Leçons de la Mère-Terre and Un saumon pour Simon. Her co-translation with Susan Ouriou, Stolen Sisters, was shortlisted for the Governor General’s Award for Translation in 2015.

Actually, there’s something I have to tell you. Last spring, I went with the other grade nine classes to see a Shakespeare play. Even if I didn’t really get the whole story and all its battles, violence, cries and tragic destinies, from the very start I liked the sad prince and his fiancée, driven crazy by love, who drowned herself in the river. Her name was Ophelia, an incredibly gentle name, don’t you think? She looked as though she were asleep on the riverbed, so beautiful in her wet gown clinging to her body and her hair like golden seaweed. Ever since, I’ve taken her name in secret. You’re the first to know.

The narration and dialogue are raw and moving . . . . It’s exhilarating to see Ophelia’s transformation from angry and traumatized to open and alive.

A powerful book of a teen's struggles, a deep and insightful introspection . . .

In her introspective sketchbook of a novel, Gingras quietly exposes Ophelia's and Ulysses' vulnerabilities while depicting their journey to becoming more comfortable in their own skins.

. . . the palpable longing in Ophelia’s narration could appeal to readers sensitive to imagistic prose.

Ophelia is is a book that will speak to teens on many different levels. . . . a thoughtful and illuminating book that will hopefully resonate with readers long after the final page.

Meant for girls, this book will please their mothers as well, or anyone who has been through high school and remembers the thrill of falling in love for the first time ...

Other titles by Charlotte Gingras

Other titles by Christelle Morelli

Millions for a Song

Jane, the Fox and Me