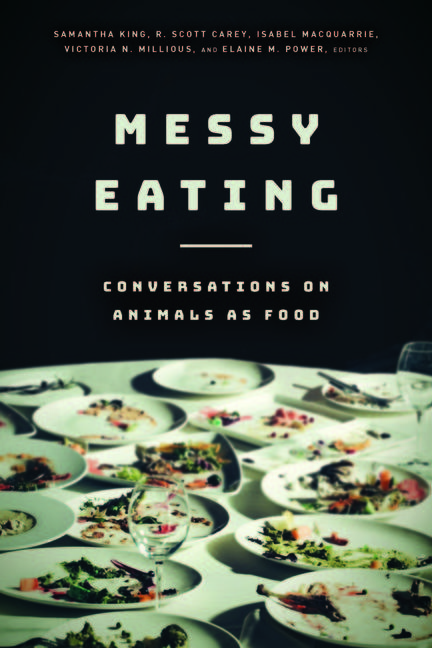 Literature on the ethics and politics of food and that on human–animal relationships have infrequently converged. Representing an initial step toward bridging this divide, Messy Eating features interviews with thirteen prominent and emerging scholars about the connections between their academic work and their approach to consuming animals as food. The collection explores how authors working across a range of perspectives—postcolonial, Indigenous, black, queer, trans, feminist, disability, poststructuralist, posthumanist, and multispecies—weave their theoretical and political orientations with daily, intimate, and visceral practices of food consumption, preparation, and ingestion.
Each chapter introduces a scholar for whom the tangled, contradictory character of human–animal relations raises difficult questions about what they eat. Representing a departure from canonical animal rights literature, most authors featured in the collection do not make their food politics or identities explicit in their published work. While some interviewees practice vegetarianism or veganism, and almost all decry the role of industrialized animal agriculture in the environmental crisis, the contributors tend to reject a priori ethical codes and politics grounded in purity, surety, or simplicity. Remarkably free of proscriptions, but attentive to the Eurocentric tendencies of posthumanist animal studies, Messy Eating reveals how dietary habits are unpredictable and dynamic, shaped but not determined by life histories, educational trajectories, disciplinary homes, activist experiences, and intimate relationships.
These accessible and engaging conversations offer rare and often surprising insights into pressing social issues through a focus on the mundane—and messy— interactions that constitute the professional, the political, and the personal.
Contributors: Neel Ahuja, Billy-Ray Belcourt, Matthew Calarco, Lauren Corman, Naisargi Dave, Maneesha Deckha, María Elena García, Sharon Holland, Kelly Struthers Montford, H. Peter Steeves, Kim TallBear, Sunaura Taylor, Harlan Weaver, Kari Weil, Cary Wolfe

Samantha King is Professor of Gender Studies, Cultural Studies, and Kinesiology and Health Studies at Queen’s University. She is the author of Pink Ribbons, Inc.: Breast Cancer and the Politics of Philanthropy.

R. Scott Carey is a grant writer with a PhD in Kinesiology and Health Studies from Queen’s University.

Isabel MacQuarrie is a Juris Doctor candidate at Harvard Law School with an MA in sociology from Queen’s University.

Victoria N. Millious is a PhD candidate in the School of Kinesiology and Health Studies, Queen’s University.

Elaine M. Power is Associate Professor in the School of Kinesiology and Health Studies at Queen’s University.

Neel Ahuja is Associate Professor in Feminist Studies and Critical Race and Ethnic Studies at the University of California, Santa Cruz. He is the author of Bioinsecurities: Disease Interventions, Empire, and the Government of the Species (Duke University Press, 2016). His articles have appeared in GLQ, Social Text, and PMLA, among other venues.

BILLY-RAY BELCOURT (he/him) is a writer and academic from the Driftpile Cree Nation. His debut book of poems, This Wound is a World, won the 2018 Griffin Poetry Prize and the 2018 Robert Kroetsch City of Edmonton Book Prize, and was named the Most Significant Book of Poetry in English by an Emerging Indigenous Writer at the 2018 Indigenous Voices Award. It was also a finalist for the Governor General’s Literary Award, the Gerald Lampert Memorial Award, and the Raymond Souster Award. It was named by CBC Books as one of the best Canadian poetry collections of the year. Billy-Ray is a Ph.D. student and a 2018 Pierre Elliott Trudeau Foundation Scholar in the Department of English and Film Studies at the University of Alberta. He is also a 2016 Rhodes Scholar and holds a Master’s degree in Women’s Studies from Wadham College at the University of Oxford.

Matthew R. Calarco is Professor of Philosophy at California State University, Fullerton. He is the author of Zoographies: The Question of the Animal from Heidegger to Derrida (Columbia University Press, 2008) and Thinking Through Animals: Identity, Difference, Indistinction (Stanford University Press, 2015).

Lauren Corman is an associate professor of sociology at Brock University. She hosted the animal advocacy radio program and podcast Animal Voices, a show linking human and other animal issues, from 2001–2009. She has taught critical animal studies courses over the past six years. Her publications focus on critical animal studies pedagogy, intersectional feminism, and contemporary social theory.

Naisargi N. Dave is Associate Professor of Anthropology at the University of Toronto and author of Queer Activism in India: A Story in the Anthropology of Ethics (Duke University Press, 2012). Her work has appeared in Social Text, Cultural Anthropology, and Feminist Studies, among other venues. Her book in progress is titled The Social Skin: Humans and Animals in India.

Maneesha Deckha (BA, McGill; LLB, Toronto; LLM, Columbia) is associate professor of law at the University of Victoria. Her research interests include critical animal law, post-colonial feminist theory, health law, and bioethics. Her work has appeared in numerous publications, including the McGill Law Journal, the Harvard Journal of Law & Gender, Hypatia, the Medical Law Review, and Sexualities. She has received grants from the Canadian Institutes of Health Research and the Social Sciences and Humanities Research Council. In 2006, her seminar on Animals, Culture and the Law received the US Humane Society’s Animal and Society New Course Award. In 2008, she held the Fulbright Visiting Chair in Law and Society at New York University. She is currently completing a book on feminism, post-colonialism, and animal law.

María Elena García is Associate Professor in the Comparative History of Ideas program and the Jackson School of International Studies at the University of Washington. She is the author of Making Indigenous Citizens: Identities, Development, and Multicultural Activism in Peru (Stanford University Press, 2005), with a second book, Culinary Spectacles: Gastro-Politics and
Other Tales of Race and Species in Peru, under contract with the University of California Press.

H. Peter Steeves is Professor of Philosophy and Director of the Humanities Center at DePaul University. He is the author of several books, including Animal Others: On Ethics, Ontology, and Animal Life (SUNY Press, 1999), The Things Themselves: Phenomenology and the Return to the Everyday (SUNY Press, 2006), and Beautiful, Bright, and Blinding: Phenomenological Aesthetics and the Life of Art (SUNY Press, 2017).

Kelly Struthers Montford is a Postdoctoral Research Fellow in Punishment, Law and Social Theory at the University of Toronto. She received her PhD in sociology from the University of Alberta in 2017. Her work has appeared in the New Criminal Law Review, PhiloSophia, and the Canadian Journal of Women and the Law, among other venues.

Kim TallBear is Associate Professor and Canada Research Chair in Indigenous Peoples, Technoscience, and Environment in the Faculty of Native Studies at the University of Alberta. She is author of Native American DNA: Tribal Belonging and the False Promise of Genetic Science (University of Minnesota Press, 2013) and a member of the Oak Lake Writers, a group of Dakota, Lakota, and Nakota (Oceti Sakowin) writers.

Sunaura Taylor is an artist and writer based in New York City and the author of Beasts of Burden: Animal and Disability Liberation (The New Press, 2017). She has written for AlterNet, American Quarterly, BOMB, the Monthly Review, Qui Parle, and Yes! magazine and has contributed to the books Ecofeminism, Defiant Daughters, Occupy!; Stay Solid; and Infinite City.

Harlan Weaver is Assistant Professor in the Gender, Women, and Sexuality Studies Department at Kansas State University. He has written articles on queer intimacies in multispecies ethnography; interspecies intersectionalities in dog fighting, rescue, and training; and trans affect in GLQ, Catalyst, American Quarterly, and Somatechnics.

Kari Weil is University Professor of Letters at Wesleyan University. She is the co-editor of a special issue of Hypatia entitled “Animal Others” (Gruen & Weil, 2012) and author of Thinking Animals: Why Animal Studies Now (Columbia University Press, 2012). Her book Horses and Their Humans in Nineteenth-Century France: Mobility, Magnetism, Meat is forthcoming.

Cary Wolfe is the Bruce and Elizabeth Dunlevie Professor of English at Rice University and the director of 3CT: Center for Critical and Cultural Theory. While he is most prominently known for his work in animal studies and posthumanism, his research and teaching covers fields such as systems theory, pragmatism, biopolitics, and American literature and culture. He is the founding editor of the University of Minnesota Press series Posthumanities, to which he contributed the monograph What Is Posthumanism? (2010). He is the author of Animal Rites: American Culture, the Discourse of Species, and Posthumanist Theory (2003) and Before the Law: Humans and Other Animals in a Biopolitical Frame (2012). His latest projects are: the monograph Ecological Poetics, or, Wallace Stevens’ Birds and a special issue of Angelaki: Journal of the Theoretical Humanities on “Ontogenesis beyond Complexity,” on the work of the multidisciplinary Ontogenetics Process Group, of which he is a member.

An original and important intervention into critical animal and food studies. Messy Eating pushes us past the question 'are we what we eat?' to really inquire into the quotidian and larger political commitments that must be taken into consideration when we think about the complex layering of what we eat, how we eat--the messiness of it all.---Anita Mannur, Miami University,

Eating animals will give you insights on how people outside of the agricultural industry view eating meat.---Temple Grandin, Animals Make us Human

Messy Eating is a perfect title for this important collection. It would be an excellent choice for different courses focusing on animal-human relationships and for other people who want to know how different people view the various ways they choose to interact with nonhuman beings and why.---Marc Bekoff, Ph.D, University of Colorado (Boulder), The Animals' Agenda: Freedom, Compassion, and Coexistence in the Human Age

Other titles by Elaine M. Power

Why Families Eat the Way They Do

Other titles by Billy-Ray Belcourt

A History of My Brief Body

Notes from the Field

Other titles by Lauren Corman

Other titles by Maneesha Deckha

Other titles by H. Peter Steeves

Other titles by Cary Wolfe