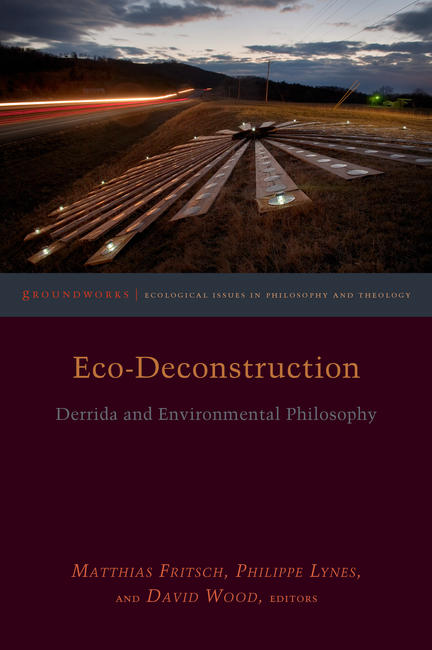 Eco-Deconstruction marks a new approach to the degradation of the natural environment, including habitat loss, species extinction, and climate change. While the work of French philosopher Jacques Derrida (1930–2004), with its relentless interrogation of the anthropocentric metaphysics of presence, has already proven highly influential in posthumanism and animal studies, the present volume, drawing on published and unpublished work by Derrida and others, builds on these insights to address the most pressing environmental issues of our time.
The volume brings together fifteen prominent scholars, from a wide variety of related fields, including eco-phenomenology, eco-hermeneutics, new materialism, posthumanism, animal studies, vegetal philosophy, science and technology studies, environmental humanities, eco-criticism, earth art and aesthetics, and analytic environmental ethics. Overall, eco-deconstruction offers an account of differential relationality explored in a non-totalizable ecological context that addresses our times in both an ontological and a normative register.
The book is divided into four sections. “Diagnosing the Present” suggests that our times are marked by a facile, flattened-out understanding of time and thus in need of deconstructive dispositions. “Ecologies” mobilizes the spectral ontology of deconstruction to argue for an originary environmentality, the constitutive ecological embeddedness of mortal life. “Nuclear and Other Biodegradabilities,” examines remains, including such by-products and disintegrations of human culture as nuclear waste, environmental destruction, and species extinctions. “Environmental Ethics” seeks to uncover a demand for justice, including human responsibility for suffering beings, that emerges precisely as a response to original differentiation and the mortality and unmasterable alterity it installs in living beings. As such, the book will resonate with readers not only of philosophy, but across the humanities and the social and natural sciences.

Matthias Fritsch is Professor of Philosophy at Concordia University, Montréal. He is the author of The Promise of Memory: History and Politics in Marx, Benjamin, and Derrida and Taking Turns with Earth: Ways to Intergenerational Justice through Phenomenology and Deconstruction and co-translator of Heidegger’s The Phenomenology of Religious Life.

Philippe Lynes is Fulbright Canada Visiting Research Chair in Environmental Humanities at the University of California, Irvine. He is the translator of Derrida’s Advances.

David Wood was born in Scotland and grew up there and in England. In 1973 he made the move to Canada to work in the environmental field, and in 1976 co-founded a small solar energy company. Eventually he followed his life-long passion for food and opened the David Wood Food Shop in Toronto in 1984. He operated the three shops and catering business until 1990, when he moved with his family to Salt Spring Island on B.C.'s West Coast. He continues to live there, in the midst of family and friends. He is the co-owner of the Salt Spring Island Cheese Company.

Michael Marder is a post-doctoral fellow in the Department of Philosophy at the University of Toronto.

Dawne McCance is Distinguished Professor at the University of Manitoba. Her books include Critical Animal Studies: An Introduction and Derrida On Religion.

Michael Naas is Professor of Philosophy at DePaul University in Chicago. His research covers the fields of philosophy and comparative literature, with a particular focus on ancient Greek thought and contemporary French philosophy and with a strong interest in the thinkers Nietzsche, Heidegger, Derrida, Lyotard, and Levinas. He has edited and co-translated into English a number of Jacques Derrida’s texts: The Work of Mourning (2011), Learning to Live Finally (2007), Rogues (2005), and Adieu: To Emmanuel Levinas (1999). His most recent publications are The End of the World and Other Teachable Moments: Jacques
Derrida’s Final Seminar (2015), Miracle and Machine: Jacques Derrida and the Two Sources of Religion, Science, and the Media (2012), and Plato and the Invention of Life (2018).

Kelly Oliver is W. Alton Jones Professor of Philosophy at Vanderbilt University, where she also holds appointments in the departments of African-American Diaspora Studies, Film Studies, and Women's and Gender Studies. She is the author of more than one hundred articles, fifteen scholarly books, and three novels.

Cary Wolfe is the Bruce and Elizabeth Dunlevie Professor of English at Rice University and the director of 3CT: Center for Critical and Cultural Theory. While he is most prominently known for his work in animal studies and posthumanism, his research and teaching covers fields such as systems theory, pragmatism, biopolitics, and American literature and culture. He is the founding editor of the University of Minnesota Press series Posthumanities, to which he contributed the monograph What Is Posthumanism? (2010). He is the author of Animal Rites: American Culture, the Discourse of Species, and Posthumanist Theory (2003) and Before the Law: Humans and Other Animals in a Biopolitical Frame (2012). His latest projects are: the monograph Ecological Poetics, or, Wallace Stevens’ Birds and a special issue of Angelaki: Journal of the Theoretical Humanities on “Ontogenesis beyond Complexity,” on the work of the multidisciplinary Ontogenetics Process Group, of which he is a member.

“Ecology, in its semantic disposition, relates the oikos to the logos, two concepts that Derrida never stopped analyzing. Eco-Deconstruction affirms that in rich, diverse, and inventive ways, and repositions the now extensive work on Derrida and the animal within a broader context of planetary viability. Quite simply, the stellar contributions of this volume manifest a deconstruction that welcomes a whole new environmental space.“---David Wills, Brown University

“Derrida’s last seminars proved inspirational for the burgeoning field of animal studies, but the ecological tenor and wide-ranging environmental implications of his deconstructive approach has received much less attention. This timely, original, and extraordinarily innovative collection of essays by many of the key thinkers in the field does much to rectify this. It will be an invaluable reference point for all those interested in the intersection of continental philosophy, literary criticism, posthumanism, and environmental concerns.“---Mick Smith, Queens University

“In 1998, Derrida hailed ecology as a 'new dimension of ‘living together.’ Almost twenty years later, ecology is nothing new: It even risks having overtaken itself in the sense of no longer marking any specific domain. It is clear that ecology traverses all spheres of all existences. The eco-deconstruction undertaken in this volume means both an ecology of deconstruction (What is a disseminated oikos? a differing-deferring one? a prosthetic one?) and also a deconstruction of ecology, thus of economy, ecopolitics, ecomythics, and ecosophy.“---Jean-Luc Nancy, University of Strasbourg,

Other titles by Matthias Fritsch

The Phenomenology of Religious Life

Other titles by David Wood

Around the World in 80 Rounds

Other titles by Timothy Clark

The Oxford Handbook of Management Consulting

Other titles by Michael Marder

The Event of the Thing

Other titles by Dawne McCance

The Reproduction of Life Death

Other titles by Michael Naas

On the Raising of the Body

Other titles by Cary Wolfe

Conversations on Animals as Food