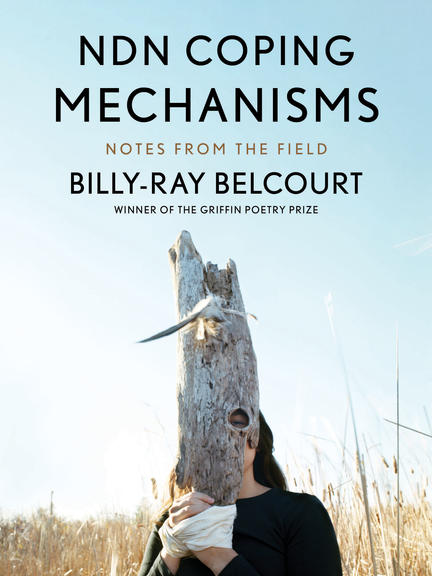 In his follow-up to This Wound is a World, Billy-Ray Belcourt’s Griffin Poetry Prize–winning collection, NDN Coping Mechanisms: Notes from the Field is a provocative, powerful, and genre-bending new work that uses the modes of accusation and interrogation.

He aims an anthropological eye at the realities of everyday life to show how they house the violence that continues to reverberate from the long twentieth century. In a genre-bending constellation of poetry, photography, redaction, and poetics, Belcourt ultimately argues that if signifiers of Indigenous suffering are everywhere, so too is evidence of Indigenous peoples’ rogue possibility, their utopian drive.

In NDN Coping Mechanisms: Notes from the Field, the poet takes on the political demands of queerness, mainstream portrayals of Indigenous life, love and its discontents, and the limits and uses of poetry as a vehicle for Indigenous liberation. In the process, Belcourt once again demonstrates his extraordinary craft, guile, and audacity, and the sheer dexterity of his imagination.

BILLY-RAY BELCOURT (he/him) is a writer and academic from the Driftpile Cree Nation. His debut book of poems, This Wound is a World, won the 2018 Griffin Poetry Prize and the 2018 Robert Kroetsch City of Edmonton Book Prize, and was named the Most Significant Book of Poetry in English by an Emerging Indigenous Writer at the 2018 Indigenous Voices Award. It was also a finalist for the Governor General’s Literary Award, the Gerald Lampert Memorial Award, and the Raymond Souster Award. It was named by CBC Books as one of the best Canadian poetry collections of the year. Billy-Ray is a Ph.D. student and a 2018 Pierre Elliott Trudeau Foundation Scholar in the Department of English and Film Studies at the University of Alberta. He is also a 2016 Rhodes Scholar and holds a Master’s degree in Women’s Studies from Wadham College at the University of Oxford.

For all the ferocious energy and one-two punch of language here, this is also a concentrated, beautifully managed work.

An impressive follow-up to his first book.

Both intellectual and visceral, these poems dazzle with metaphoric richness and striking lyricism.

A masterful blend of the personal and the political, the ephemeral and the corporeal, the theoretical and the emotional.

Other titles by Billy-Ray Belcourt

A History of My Brief Body

Conversations on Animals as Food

2020 Winners of the Alberta Literary Awards