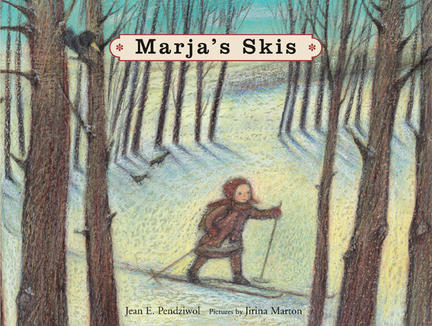 Marja admires her big, brave older sister and is waiting until she too can ski and go to school. When Marja turns seven she is finally ready. Her father tells her, When you are strong inside, you can do anything. And despite her mother's objections, she skis off to school on her own.

It's hard to stay true to her father though when he dies in a logging accident, and the family must struggle to survive. But Marja persists, skiing to school each day, learning her sums and letters and how to speak English, just as her father had always wanted. Then one sunny spring afternoon as she is skiing home alone, Marja's new-found strength is put to the test.

Jean E. Pendziwol has published several highly acclaimed picture books, including Once Upon a Northern Night, illustrated by Isabelle Arsenault, finalist for the Governor General’s Literary Award and the TD Canadian Children’s Literature Award. She is also the author of Marja’s Skis, illustrated by Jirina Marton, and The Red Sash and Dawn Watch, illustrated by Nicolas Debon. Jean’s debut adult novel, The Lightkeeper’s Daughters, will be published in 2017 in more than ten languages. Jean finds inspiration in the rich history, culture and geography of Northwestern Ontario where she lives in the shadow of the Nor’Wester Mountains near Lake Superior.

...Marton's full pages illustrations are set in a winter wilderness.

Whether Marton...is depicting the early spring sun melting snow deep within the forest or showing the strength of a single candle illuminating a dark interior, she captures the mood beautifully.

...illustrations have a softly focused, ethereal quality. The evocative text is rich with elements of Nordic culture, and endnotes provide a historical context. While the period will be unfamiliar to young readers, Marja's emotions ring true.

Marja lives in a small Finnish community along the north shore of Lake Superior at the end of the nineteenth century. More than anything, she wishes to be big and strong. She admires her brave father who cuts down trees and retrieves the wood with his horse-drawn sleigh. She looks up to her sister, Eeva, who attends school and possesses the strength to do the chores that Marja wishes she could undertake.

When Marja turns seven, her father sends her to school to learn English, figure sums and write letters. “When you are strong inside, you can do anything,” he tells her. To Marja’s delight, she is given a pair of hand-made skis with which to travel to and from school. Dark days ensue, however, when Marja’s father dies in a logging accident, and the family must struggle to survive. It is difficult for Marja to feel strong. Then, one spring day, as Marja skis home from school, she comes upon a lumberjack in desperate need of help. Remembering her father’s words, she risks her life to bring him to safety.

Jean E. Pendziwol’s story is quietly and beautifully told. One feels Marja’s longing to be more than she is, this being linked to the love and strong ties of her family. The mounting terror of the stranded lumberjack is gripping, but is balanced by the growing confidence building in Marja as she courageously goes about the rescue. The wide range of emotions is subtly, yet effectively portrayed. Authenticity resounds throughout the simple unfolding of this tale. (The author learned the customs and trials of isolated Finnish communities in Northern Ontario from an elderly relative.) The sequencing of the events seems ordinary at first glance, yet there is a profoundness here which quietly emerges to touch the inner being of any reader or listener regardless of age.

There is a translucent quality in Jirina Marton’s oil pastel illustrations. Her artwork juxtaposes stark winter outdoor scenes against warm, lamplit interiors. The snow positively shimmers, sharply contrasting with the shadows cast within the forest. The expressions on the characters’ faces evocatively reflect longing, love and hope.

This is a book of unusual perception and appreciation of the core human threads that bind us close.

At seven, Marja is strong enough to ski to school alone. After her father dies, Marja finds it hard to stay true to his words: “When you are strong inside, you can do anything.” That is until she must apply her new-found strength to help two men in danger. An author’s note and glossary are included.

Other titles by Jean E. Pendziwol

When I Listen to Silence

I Found Hope in a Cherry Tree

Me and You and the Red Canoe

Once Upon a Northern Night

The Tale of Sir Dragon

Tale of Sir Dragon, The

Once Upon a Dragon

Stranger Safety for Kids (and Dragons)