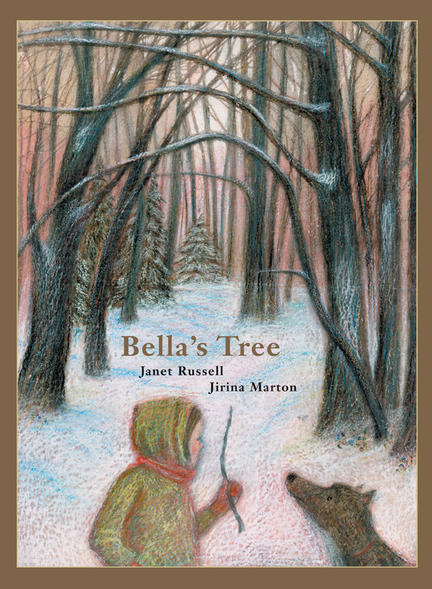 Winner of the Governor General's Literary Award for Children's Illustration

Bella's grandmother, Nan, has become "crooked." All those berries that she used to love picking are lying under the snow. Even worse, she's too old to go out and find the perfect Christmas tree.

But spunky Bella and Bruno, the dog, are certain that they can find a tree and smooth out Nan's misery. It takes them a few trees, some songs and the help of some birds, but the end result is perfect, leaving grandmother, girl and dog with "their eyes blinking from the beauty, the beautier, the beautiest."

Janet Russell was inspired to write Bella's Tree by her husband's mother, who really did love to pick berries, was never crooked, often enchanting and always exceedingly practical; by her daughter, Antonia; and by the late Bruno, the biggest dog that ever lived. Janet is a seabird biologist as well as the publisher and audio producer of Rattling Books. She lives in Tors Cove, Newfoundland.

...a haunting mix of folk-tale, song, and dialect.

...the full-page, almost-impressionistic oil pastel illustrations are evocative, whether depicting a warm cabin interior or the snowy woods.

A wondrous tale...combin[ing] traditional songs and the Newfoundland dilalect shared between the grandmother and grandchild.

Janet Russell fabricates a story that has the feel of an old folk tale. The simple plot, the careful repetition of events, intermixed with song, make Bella's Tree inviting for storytellers...Russell reminds her audience of the powerful role elders can play in the lives of young people, and Marton's simple and fequently beautiful images reinforce the charm of this grandmother-granddaughter relationship