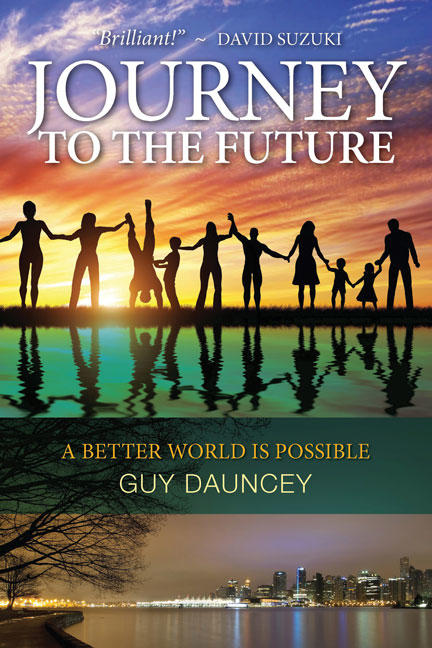 From Elizabeth May, NDP MP Murray Rankin and UK Green Party leader Caroline Lucas, to activists Tzeporah Berman, Angela Bischoff and Bill McKibben, and scientists David Suzuki, Andrew Weaver and Elisabet Sahtouris, the endorsements for Guy Dauncey’s new book are united: Journey To The Future is an inspiration that must be widely read.

In this blockbuster novel, young protagonist Patrick Wu visits a future world?Vancouver in 2032?brimming with innovation and hope, where the climate crisis is being tackled, the solar revolution is underway and a new cooperative economy is taking shape. But enormous danger still lurks.

David R. Boyd, co-chair of Vancouver’s Greenest City initiative, says Journey To The Future is “an imaginative tour de force, blending science, philosophy and fiction into a delightful story about how we can and must change the world."

Guy Dauncey is a futurist who works to develop a positive vision of a sustainable future, and to translate that vision into action. He is founder of the BC Sustainable Energy Association, co-founder of the Victoria Car Share Cooperative, and the author or co-author of ten books, including The Climate Challenge: 101 Solutions to Global Warming and most recently Journey to the Future: A Better World Is Possible. He is an Honorary Member of the Planning Institute of BC, a Fellow of the Findhorn Foundation in Scotland, and a Fellow of the Royal Society for the Arts. He lives on Vancouver Island, in Canada.

Other titles by Guy Dauncey

Stories from a Sustainable World