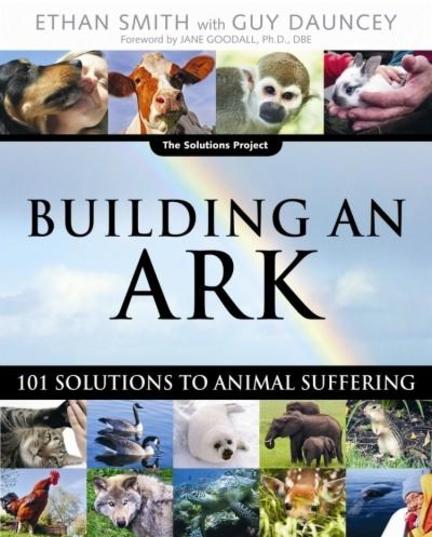 Building an Ark: 101 Solutions to Animal Suffering is a first-of-its-kind, inspiring look at practical solutions to the impact humans have on animals and the natural world.

For several decades there has been a global movement building; an ever-increasing consciousness that will soon affect animal welfare and the future of life on Earth – if it's given time to do so. Building an Ark is the story of this movement. Extensively researched and drawing on practical examples from around the world, it provides a voice for both the animals and the humans who have dedicated their lives to building a sustainable future for all species.

The Ark is ready for all to board. Individuals, action groups, schools, businesses, governments, farmers, fishers, developing nations — there's a role for everyone on this journey. Building an Ark offers a host of solutions that — if adopted — will ensure that animals will suffer less today, and that humans and animals will share a more sustainable planet tomorrow.

Ethan Smith is a writer, animal welfare advocate and author/editor of the anthology Softly On This Earth: Joining Those Who Are Healing Our Planet.

Guy Dauncey is a futurist who works to develop a positive vision of a sustainable future, and to translate that vision into action. He is founder of the BC Sustainable Energy Association, co-founder of the Victoria Car Share Cooperative, and the author or co-author of ten books, including The Climate Challenge: 101 Solutions to Global Warming and most recently Journey to the Future: A Better World Is Possible. He is an Honorary Member of the Planning Institute of BC, a Fellow of the Findhorn Foundation in Scotland, and a Fellow of the Royal Society for the Arts. He lives on Vancouver Island, in Canada.

Primatologist and anthropologist Dame Jane Morris Goodall DBE is considered to be the world's foremost expert on chimpanzees. Goodall is best known for her sixty-year study of social and family interactions of wild chimpanzees since she first went to Gombe Stream National Park in Tanzania in 1960. She is the founder of the Jane Goodall Institute and the Roots & Shoots program, and she has worked extensively on conservation and animal welfare issues. She has served on the board of the Nonhuman Rights Project since its founding in 1996. In April 2002, she was named a UN Messenger of Peace. Goodall is an honorary member of the World Future Council. Goodall is the author of numerous books, including In the Shadow of Man and Reason for Hope.

Other titles by Ethan Smith

Other titles by Guy Dauncey

Journey to the Future

A Better World Is Possible

Stories from a Sustainable World

Other titles by Jane Goodall

A Veterinarian’s Visual Memoir of Our Vanishing Great Ape Relatives

Man of the Trees

The Trouble with Lions

A Glasgow Vet in Africa