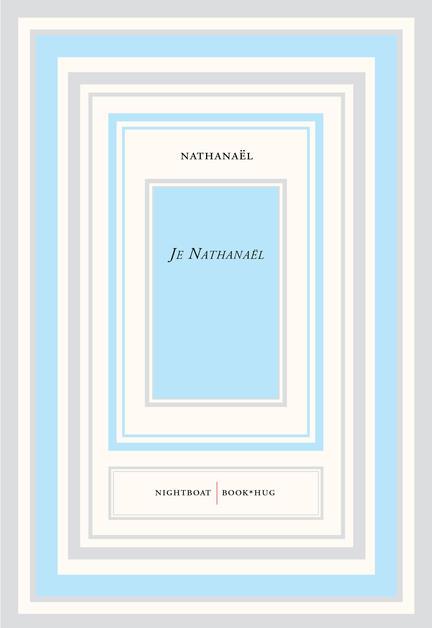 Je Nathanaël is an endangered text. Neither essay nor poem nor novel nor sex-show, what it takes from language it gives back to the body.

In this new and updated edition of Je Nathanaël, first published by BookThug in 2006, Nathanaël explores ways in which language constrains the body, shackles it to gender, and proposes instead a different way of reading, where words are hermaphroditic and transform desire in turn. Suggesting that one body conceals another, it lends an ear to this other body and delights in the anxiety it provokes. With parts written in French, other parts in English, this is truly a hybrid text, throwing itself into question as it acts upon itself in translation. It is both originator and recipient of its own echo. In this regard it does not, cannot exist, pulling insistently away from itself in an attempt to draw attention to the very things it seeks to conceal. In this way, Je Nathanaël is a book of paradox, negating itself as it comes into being.
With an afterword by Elena Basile, and a postface by the author.

Nathanaël is the author of more than a score of books written in English or in French, including Je Nathanaël (2018); Pasolini's Our (2018); Feder (2016); Sotto l'immagine (2014) and Sisyphus, Outdone: Theatres of the Catastrophal (2012). The French-language notebooks, Carnet de désaccords (2009), Carnet de délibérations (2011), and Carnet de somme (2012) were recast in English in a single volume as The Middle Notebookes (2015), which received the inaugural Publishing Triangle Award for Trans and Gender-Variant Literature.The essay of correspondence, Absence Where As (Claude Cahun and the Unopened Book) (2009) was first published in French as L'absence au lieu (2007). Nathanaël's work has been translated into Basque, Greek, Slovene, and Spanish (Mexico), with book-length publications in Bulgarian and Portuguese (Brazil). The recipient of the Prix Alain-Grandbois for ...s'arrête? Je (2008), Nathanaël's translations include works by Édouard Glissant, Catherine Mavrikakis, and Hilda Hilst (the latter in collaboration with Rachel Gontijo Araújo). Nathanaël's translation of Murder by Danielle Collobert was a finalist for a Best Translated Book Award in 2014. Her translation of The Mausoleum of Lovers by Hervé Guibert has been recognized by fellowships from the PEN American Center and the Centre National du Livre de France. Nathanaël lives in Chicago.

Other titles by Nathanaël