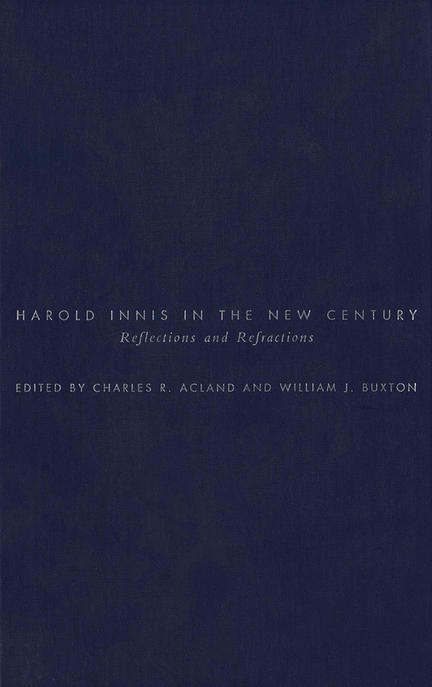 The book is divided into three sections: "Reflections on Innis" provides a historical reassessment of Innis, "Gaps and Silences" considers the limitations of both Innis's thought and his interpreters, and "Innis and Cultural Theory" offers speculations on his influence on cultural analysis. The interpretations offered reflect the changing landscape of intellectual life as boundaries between traditional disciplines blur and new interdisciplinary fields emerge.

Harold Innis in the New Century is a valuable resource for scholars and students of Canadian studies, communication studies, cultural studies, economic history, and political science.

"Harold Innis in the New Century crackles with interdisciplinary tensions in a very stimulating way, and almost every piece in the collection has an eye on a context for Innis's ideas that is in some way a little different -- from the Whig tradition and the Scottish Enlightenment to cybernetics and aesthetics. The diversity is truly impressive. What other modern or 'amodern' or 'antimodern' author could generate such diverse yet consistently engrossed responses from a generation of generally postmodern communications experts?" Doug Long, Department of Political Science, University of Western Ontario

Other titles by William J. Buxton

by (author) Harold A. Innis
introduction by William J. Buxton

Harold Innis and the North