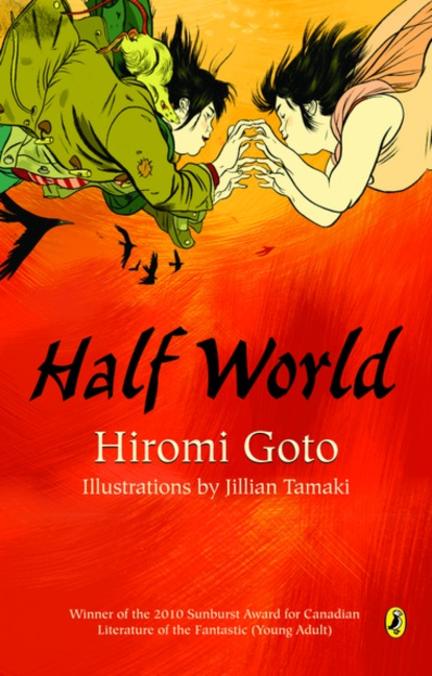 Melanie Tamaki is an outsider. As the unpopular and impoverished only child of a loving but neglectful mother, she is just barely coping with school and life. But everything changes on the day she returns home to find her mother is missing, lured back to Half World by a vile creature calling himself Mr. Glueskin. Soon Melanie embarks on an epic and darkly fantastical journey to Half World to save her mother. What she does not yet realize is that the state of the universe is at stake.... Award-winning author Hiromi Gotoï¿½s novel is an adventurous, genre-bending fantasy of shape-shifting characters, tortured half-lives, and redemption.

ï¿½Goto has created an unusual fantasy horror novel thatï¿½s something like a Gaiman tale with a dash of Asian magic. Readers who want a different kind of fantasy and who like a villain who makes the skin crawl should enjoy this quick read. Itï¿½s a rare treat and belongs in most YA collections.ï¿½ - School and Library Journal

ï¿½Like a Hieronymous Bosch painting come to life, Half World throws readers into a violent struggle to restore cosmic balance between the Realm of Flesh, the Realm of Spirit, and the Half Worldï¿½. those with a taste for dark fantasy (and gore) will be thrilled by Melanieï¿½s confrontation with her own fears and Gotoï¿½s nightmarish creaturesï¿½ - Quill & Quire

ï¿½[A] rich, elegant, and compelling novel.ï¿½ - The Bulletin of the Center for Childrenï¿½s Books

ï¿½Half World's protagonist is an agent of change in a fixed netherworld, and for young adults who at times feel overwhelmed by life, this is a powerful message indeedï¿½. Through charting Melanie's demanding trek, the novel suggests that by making good choices for ourselves we can overcome the ennui of our own half-worlds. Goto's Half World is a crazy, dark and yet cathartic journey. Hang on for the ride.ï¿½ - Vancouver Sun

ï¿½The sheer weirdness of the plot, coupled with Gotoï¿½s gripping narration, will make it difficult for readers to turn away from this book. It is a great title to recommend to fantasy fans who are familiar withï¿½and enjoyï¿½warped fiction.ï¿½ - Childrenï¿½s Literature

ï¿½Author Hiromi Gotoï¿½has created a story that is complex, unsettling (sometimes downright stomach-churning), thought-provoking and not an easy read. For those who stay with it, however, the results are rewarding.ï¿½ - Montreal Gazette

ï¿½Half World is a haunting combination of a coming-of age novel and a spiritual quest, a mad funhouse of horrors and a tale of redemption and love. Wonderfully odd, and quite unforgettable.ï¿½ - Neil Gaiman

ï¿½Half World is an absolute treasure of a book, one of those hidden gems that deserves as wide an audience as possible.ï¿½ - Charles de Lint

ï¿½Itï¿½s a fast-moving and provocative journey with cosmically high stakes, and one that should readily appeal to fans of dark, nightmarish fantasy.ï¿½ - Publisherï¿½s Weekly

ï¿½Readers looking for a dark, horrific fantasy or an unusual heroine will enjoy this tale.ï¿½ - Voice of Youth Advocates (VOYA)

ï¿½Myths and monsters, love and terror -- Hiromi Goto is a master storyteller!ï¿½ - Ellen Klages, author of The Green Glass Sea

ï¿½Entirely original and unclassifiable. Richly imagined phantasmagoric scenes decorate every iridescent page. Gotoï¿½s stylish, incendiary prose lifts Half World above the YA category; this novel crosses age boundaries and could just as easily be categorized as a book for adults.ï¿½ - Sunburst Award Jury

ï¿½In Half World, readers are taken on a thrilling, poignant adventure where Eastern and Western mythologies are woven together. Commonwealth award-winning author Hiromi Goto has created a dark, otherworldly page-turner that will most certainly appeal to young adult readers regardless of whether they are speculative fiction enthusiasts. Gotoï¿½s elegant prose is graced by about a dozen black and white illustrations by the award-winning Jillian Tamaki. Her brush and ink illustrations superbly capture Melanieï¿½s journey and the turmoil of the Half World. Goto has created an absolutely riveting tale that moves with cinematic pacing and vividness. Half World is nothing short of a masterpiece.ï¿½ - Canadian Children's Book News

In this fantastical coming-of-age novel, Melanie Tamaki, a lonely, overweight 14- year-old returns home from another rough day at school to find that her loving, albeit neglectful, mother has disappeared. When Melanie receives a phone call from the mysterious Mr. Glueskin, a creature with a sticky, phlegmy voice, she is told that her mother is being held hostage in a purgatory-like realm called the Half World. When Melanie crosses over to the Half World, she realizes that she must restore balance between the Realm of Flesh, the Realm of Spirit and the Half World if she wants to save her mother… and the universe. Can Melanie confront her fears and realize that she has the power to change the world?

In Half World, readers are taken on a thrilling, poignant adventure where Eastern and Western mythologies are woven together. Commonwealth Awardwinning author Hiromi Goto has created a dark, otherworldly page-turner that will most certainly appeal to young adult readers regardless of whether they are speculative fiction enthusiasts.

Goto’s elegant prose is graced by about a dozen black and white illustrations by the award-winning Jillian Tamaki. Her brush and ink illustrations superbly capture Melanie’s journey and the turmoil of the Half World.

Goto has created an absolutely riveting tale that moves with cinematic pacing and vividness. Half World is nothing short of a masterpiece.

Melanie is poor, unpopular and an only child. One day she comes home to find her mother missing, lured back to Half World by a nasty creature named Mr. Glueskin. Melanie goes on an epic and darkly fantastical journey to Half World to save her mother. But what she doesn’t yet realize is that the universe is in peril.

She talks to us about flash fiction, how she sees with her extra eyes, and stories "on the verge of now."