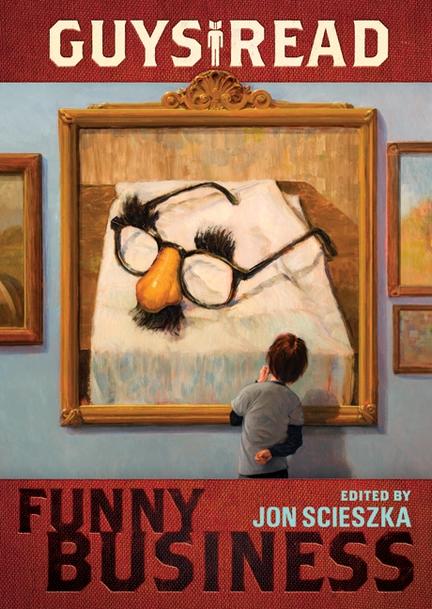 It’s here: Volume One of the official Guys Read Library. Jon Scieszka’s Guys Read initiative was founded on a simple premise: that young guys enjoy reading most when they have reading they can enjoy. And out of this comes a series that aims to give them just that. Ten books, arranged by theme, featuring the best of the best where writing for kids is concerned. Each book is a collection of original short stories, but these aren’t your typical anthologies—each book is edgy, inventive, visual, and one-of-a-kind, featuring a different theme for guys to get excited about.

Funny Business is based around the theme of—what else?—humor, and if you’re familiar with Jon and Guys Read, you already know what you’re in store for: ten hilarious stories from some of the funniest writers around. Before you’re through, you’ll meet a teenage mummy; a kid desperate to take a dip in the world’s largest pool of chocolate milk; a homicidal turkey; parents who hand over their son’s room to a biker; the only kid in his middle school who hasn’t turned into a vampire, wizard, or superhero; and more. And the contributor list includes bestselling author, award winners, and fresh new talent alike: Mac Barnett, Eoin Colfer, Christopher Paul Curtis, Kate DiCamillo (writing with Jon Scieszka), Paul Feig, Jack Gantos, Jeff Kinney, David Lubar, Adam Rex, and David Yoo.

Guys Read is all about turning young readers into lifelong ones—and with this book, and each subsequent installment in the series, we aim to leave no guy unturned.

Jon Scieszka is the National Ambassador for Children's Literature emeritus and the bestselling author of more than twenty-five books for kids, including The Stinky Cheese Man and Other Fairly Stupid Tales, Math Curse, Robot Zot!, and the Time Warp Trio series. Jon founded Guys Read to encourage a passion for reading among young boys, with the philosophy that boys love to read most when they are reading things they love. A former elementary school teacher, Jon lives in Brooklyn with his family. For more great books, more great facts, and more about your favorite authors, head over to www.guysread.com. You'll be glad you did.

Mac Barnett is the author of several books for children, including Extra Yarn, illustrated by Jon Klassen, a Caldecott Honor Book and winner of a Boston Globe-Horn Book Award; The Wolf, the Duck, and the Mouse, a New York Times bestseller; and Sam and Dave Dig a Hole, a Caldecott Honor Book and winner of the E. B. White Read Aloud Award, and The Important Thing About Margaret Wise Brown. He is the co-author, with Jory John, of the New York Times bestselling series The Terrible Two. Mac lives in California.

Adam Rex is the author of many books, including Cold Cereal and Unlucky Charms, the first two books in the Cold Cereal Saga; the New York Times bestselling picture books The Legend of Rock Paper Scissors and Frankenstein Makes a Sandwich; the middle grade novel The True Meaning of Smekday (now a major motion picture from Dreamworks, Home); and the teen novel Fat Vampire. He lives in Arizona with his wife.

David Yoo is the author of the teen novels Stop Me If You've Heard This One Before and Girls for Breakfast. He is also a contributor to Guys Read: Funny Business. He spends his spare time staring unblinking (in either wonder or abject horror) at his newborn son, Griffin. David lives in Massachusetts, where he teaches in the MFA program at Pine Manor College and at the Gotham Writers' Workshop.

KATE DICAMILLO is the author of many beloved books for young readers, including The Tale of Despereaux (La quête de Despereaux), which received a Newbery Medal; Because of Winn-Dixie (Winn-Dixie), which received a Newbery Honor; The Miraculous Journey of Edward Tulane (L'odyssée miraculeuse d'Édouard Toulaine), winner of a Boston Globe — Horn Book Award; The Magician's Elephant (L'éléphant du magicien) and the best-selling Mercy Watson series. Kate DiCamillo lives in Minneapolis.

Christopher Paul Curtis was born and reared in Flint, Michigan. After high school graduation, he worked on the assembly line of the Fisher Body Plant/Flint Plant No. 1 and graduated from the Flint branch of the University of Michigan. His first book, The Watsons Go to Birmingham - 1963, received a Newbery Honor and Coretta Scott King Honor book citation in 1996, and Bud, Not Buddy received the Newbery Medal and Coretta Scott King Award in 2000.

His 2007 book Elijah of Buxton won a Newbery Honor, the Coretta Scott King Author Award, and the Scott O'Dell Award for Historical Fiction in 2008. "This novel came to me in a way that was far different than any other," states Curtis. "From the word 'go' Elijah and I became close friends. When I'd go to the library to write, it was as if he were anxiously waiting for me, waiting to tell about his life, his worries, his adventues."

Eoin Colfer is the internationally bestselling author of the Artemis Fowl series, as well as several standalone novels, including the highly acclaimed Airman. His newest series is W.A.R.P. Eoin was born and raised in Ireland, where he was appointed Children's Laureate. Eoin has two imaginary friends who are hilarious because they insist they are his actual sons and need stuff like food and clothing.

Jack Gantos is the celebrated author of Joey Pigza Loses Control, a Newbery Honor Book. He is also the author of the popular picture books about Rotten Ralph, and Jack's Black Book, the latest in his acclaimed series of semi-autobiographical story collections featuring his alter ego, Jack Henry. Mr. Gantos lives with his wife and daughter in Boston, Massachusetts.

Other titles by Jon Scieszka

Other titles by Kate DiCamillo

The Wolf, the Duck, and the Mouse

Other titles by Bronson Pinchot

Other titles by Mac Barnett

Other titles by Adam Rex

The Journey of Little Charlie

The Madman of Piney Woods

Other titles by David Yoo