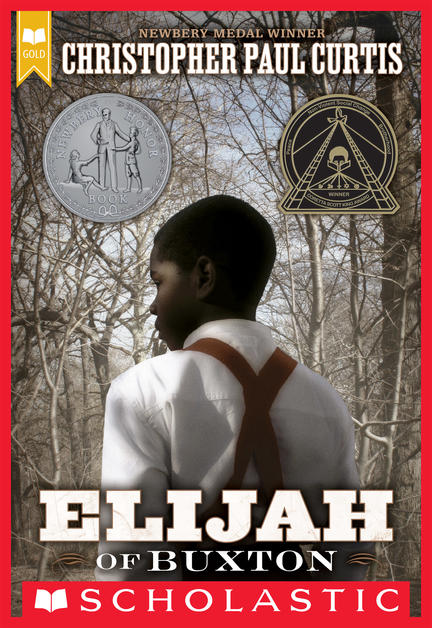 Elijah of Buxton, recipient of the Newbery Honor and winner of the Coretta Scott King Award, joins the Scholastic Gold line, which features award-winning and beloved novels. This edition includes exclusive bonus content!

Eleven-year-old Elijah lives in Buxton, Canada, a settlement of runaway slaves near the American border. Elijah's the first child in town to be born free, and he ought to be famous just for that -- not to mention for being the best at chunking rocks and catching fish. Unfortunately, all that most people see is a "fra-gile" boy who's scared of snakes and tends to talk too much. But everything changes when a former slave steals money from Elijah's friend, who has been saving to buy his family out of captivity in the South. Now it's up to Elijah to track down the thief -- and his dangerous journey just might make a hero out of him, if only he can find the courage to get back home.

Christopher Paul Curtis was born and reared in Flint, Michigan. After high school graduation, he worked on the assembly line of the Fisher Body Plant/Flint Plant No. 1 and graduated from the Flint branch of the University of Michigan. His first book, The Watsons Go to Birmingham - 1963, received a Newbery Honor and Coretta Scott King Honor book citation in 1996, and Bud, Not Buddy received the Newbery Medal and Coretta Scott King Award in 2000.

His 2007 book Elijah of Buxton won a Newbery Honor, the Coretta Scott King Author Award, and the Scott O'Dell Award for Historical Fiction in 2008. "This novel came to me in a way that was far different than any other," states Curtis. "From the word 'go' Elijah and I became close friends. When I'd go to the library to write, it was as if he were anxiously waiting for me, waiting to tell about his life, his worries, his adventues."

In his latest novel, the Newbury Awardwinning author Christopher Paul Curtis paints a memorable picture of life in 1849 in the black settlement of Buxton, Ontario. The reader follows the humorous yet suspenseful adventures of the gullible 11-year-old narrator, Elijah, in the newlyformed community that was a sanctuary for southern American slaves.

Related in a vivid, comical dialect, Elijah’s everyday routine exposes the relationships, personalities and values of the people of Buxton whose commonality is surviving slavery. The kind-hearted narrator is a celebrity of sorts as he is the first child born in Buxton, yet Elijah is plagued with the label of ‘fra-gile’— a label his mother constantly gives her only child.

It is important to note there are several violent, yet realistic, scenes which depict the brutal consequences endured by slaves. However, Curtis highlights that there is hope after such violence, as the villagers politely respect each other and their past painful experiences, no matter how tragic.

Christopher Paul Curtis shines as a fine storyteller. His compassionate novel is a suitable class read aloud for junior grades and intelligently challenges such an important historical event. Elijah of Buxton could inspire a class field trip or a website visit to Buxton National Historic Site and Museum to move beyond this rich novel.

Elijah is a firstgeneration freeborn child from Buxton, Ontario. When the town’s corrupt preacher steals money intended to buy the freedom of slaves still trapped in the U.S., Elijah sets off for nearby Detroit in pursuit of the thief.

Other titles by Christopher Paul Curtis

The Journey of Little Charlie

The Madman of Piney Woods