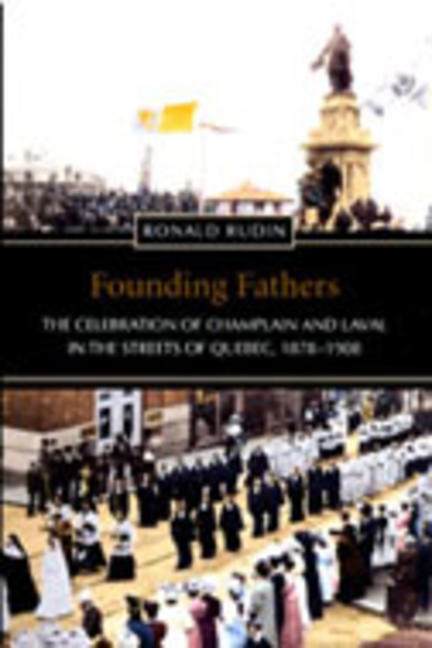 The late nineteenth and early twentieth centuries saw an unprecedented wave of public celebration of the past. Throughout the western world, heroes and great events from earlier times were celebrated through such devices as staging lavish parades, constructing intricately designed monuments, and mounting theatrical re-enactments of pivotal moments in history. In Quebec, two individuals occupied centre stage. Between 1878 and 1908, Samuel de Champlain, the founder of Quebec City (and often referred to as the lay father of French-Canadian civilization), and Mgr François de Laval, the first bishop of Quebec (and often seen as French Canada's religious father), were feted in four commemorative mega-events staged in the streets of Quebec City.

Based largely upon the archival documents left behind by the lay and ecclesiastical leaders who organized the celebrations of Champlain and Laval, Ronald Rudin's study describes the complicated process of staging these spectacles. The vast array of leaders, lay and clerical, French and English-speaking, rarely saw eye to eye about either the form or the goal of any one commemorative celebration. Accordingly, the tens, if not hundreds of thousands who came out to view these celebrations saw events with numerous messages. An examination of the four spectacles, which took place over a period of thirty years, provides an opportunity to view both changes in the nature of commemorative celebrations across the western world and tensions within Canadian society.

Ronald Rudin is a professor in the Department of History and co-director of the Centre for Oral History and Digital Storytelling at Concordia University. His most recent book, Remembering and Forgetting in Acadie, received both the US National Council on Public History Book Award and the Public History Prize of the Canadian Historical Association.

Other titles by Ronald Rudin

Remembering and Forgetting in Acadie

A Historian's Journey through Public Memory