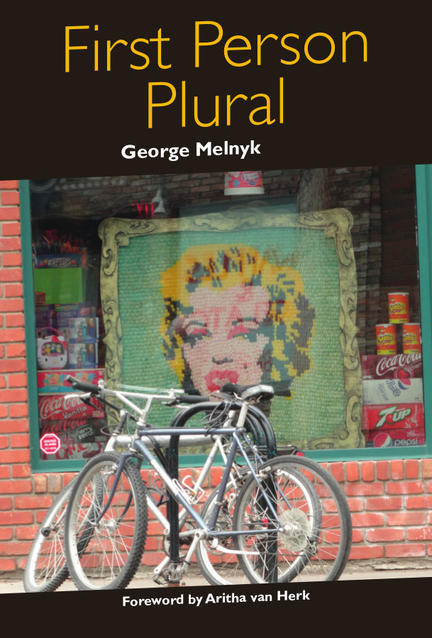 First Person Plural by George Melnyk is a collection of essays on the subject of identity and self-image. The book begins with the author’s personal memoir as a Canadian of Ukrainian heritage who arrived in Canada from a “displaced person” camp after the war. It also studies similar questions of identity and image as they affect other persons, including the Serbian-Canadian novelist David Albahari, artists Natalka Husar and Marie Elyse St. George, and Leonard Cohen. Other essays deal with the bombing of Hiroshima as portrayed by Japanese manga comic books, and the perception and image of movie stars like Marilyn Monroe.

A seasoned essayist, George Melnyk has returned to the form with a flourish. Essay is his ideal genre. From the French, “essayer,” to try, it provides the same pleasures as the short story – pithiness, reverberating in ambiguity. After all, no one is ever guaranteed certainty of outcomes from one’s “trials.” While Melnyk has always deployed the first person singular pronoun as a narrator, in First Person Plural he invites his readers to encounter him (in his encounter with artistic, literary and cinematic projections) as a plurality of persons (for which he devises a clever taxonomy, variations on “person”). Recently, such writers as Lorna Crozier, Sue Olding, Myra Coulter and Jane Silcott have turned to the essay in the form of intensely personal, even interior, narratives. Melnyk’s essays, by contrast, contain multitudes, as he juggles public, social, private and secret selves in relationship with the desired “other.” But the main effect is of a cross-examination of the personae that constitute an autobiography, which he now makes public. There’s no going back for Melnyk: “Publication,” said Marshall McLuhan somewhere, “is the self-invasion of privacy.” ~Myrna Kostash

Other titles by George Melnyk

Poems from the Pandemic

Film and the City

The Urban Imaginary in Canadian Cinema

The Young, the Restless, and the Dead