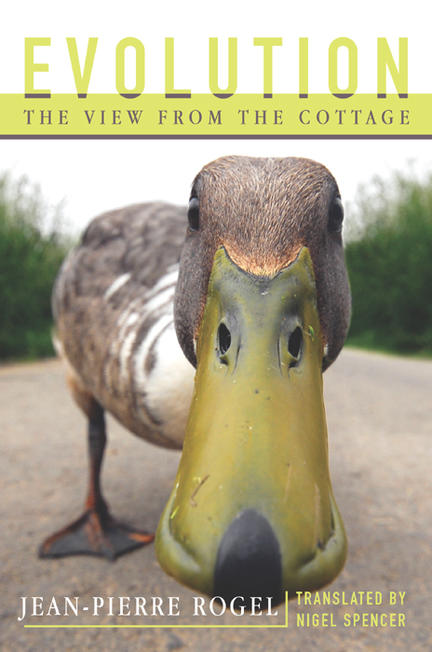 With all the attention to creationism in the news these days, Jean-Pierre Rogel decided it was time to show how Darwin's concept of natural selection can be seen in everyday situations — from a summer cottage near a lake — with examples taken from familiar species such as loons, salmon and bears. Moving through modern science, he shows how new discoveries have enabled us to understand life more deeply than in Darwin's time. He focuses in particular on the emerging field of evolutionary developmental biology, called “evo-devo” for short. By showing embryo genes in action, evo-devo explains how animals are constructed. It also explains the extraordinary diversity of the plant and animal kingdoms. Written in a lively style, based on the latest science but without the jargon too often attached to it, Evolution: The View from the Cottage celebrates evolution and finds its traces everywhere around us. You may never see loons, salmon, bears, belugas or even the humble cornstalk the same way again.

Jean-Pierre Rogel is a reporter for Découverte, a popular science program on Radio-Canada, the French-language counterpart to CBC Television. He also writes for Québec Science magazine. He is a passionate naturalist and has written extensively about how and where one can find the evidence for Evolution, and how everything on earth is connected in a web of being. Born and educated in France, he immigrated to Canada in the mid-1970s and has since been living in Montreal. This is his fourth book.

“The book is both deeply personal and highly informative as Rogel entwines personal anecdotes with scientific facts. Each chapter feels like a highly entertaining lecture from a cool university professor.” — Green Book Reviews

Evolution: The View From the Cottage

Rogel’s book of essays returns to Darwin’s theories of evolution and the progress and changes made in the past 150 years. He names scientists working in the field and details their accomplishments. Genetics now tells a more in-depth story of the why and how of evolution. The author challenges the Creationists of the Intelligent Design movement and states “the argument for Intelligent Design cannot be tested, nor can Creationism: thus they are not science”. Our species is hard on the environment and affects evolution. There is an essay detailing how salmon are in trouble due to global warming. Another treatise tells of a farmer who bemoans the use of genetically modified food. Rogel’s cabin in southern Quebec provides anecdotes and facts relevant to the chapter themes.

Rogel is a naturalist who reports for Découverte, a science program on Radio-Canada and writes for Québec Science.