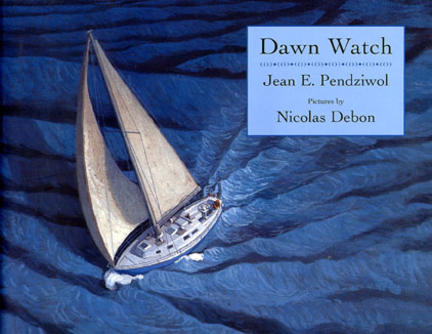 This lyrical picture book tells the story of a child and her father making a night crossing of Lake Superior on their sailboat.

As first mate, the child's job is to watch for ships, lights, land and logs while the autopilot steers the craft. Above, the Big Dipper, North Star, Milky Way and Northern Lights illuminate an inky night sky. And as dawn breaks, the horizon begins to glow and land appears, a black line between sky and sea. Striking illustrations by Nicolas Debon capture the excitement, mystery and beauty of this night-time adventure on the world's largest freshwater lake.

Jean E. Pendziwol has published several highly acclaimed picture books, including Once Upon a Northern Night, illustrated by Isabelle Arsenault, finalist for the Governor General’s Literary Award and the TD Canadian Children’s Literature Award. She is also the author of Marja’s Skis, illustrated by Jirina Marton, and The Red Sash and Dawn Watch, illustrated by Nicolas Debon. Jean’s debut adult novel, The Lightkeeper’s Daughters, will be published in 2017 in more than ten languages. Jean finds inspiration in the rich history, culture and geography of Northwestern Ontario where she lives in the shadow of the Nor’Wester Mountains near Lake Superior.

The lyrical, first-person narrative quietly captures the wonder of the universe during a late-night journey...A quiet adventure for sharing one-on-one.

Quiet pleasures, but important ones in a sailboat at sea.

The words and pictures are a superb fit: each uses perspective for dramatic effect, and they combine to create a contemplative and sometimes rapturous atmosphere.

Debon, Nicolas's impressive illustrations...capture the essence of the nighttime voyage perfectly and do much to emphasize the lyrical quality of the text, which reads like poetry. Apart from being a wonderful choice to read aloud, connections to astronomy and father-daughter relationships can be made. Highly Recommended.

...the words, filled with the water's 'hush' and 'hiss', convey a subtle drama that is beautifully extended by Debon's lustrous, moody paintings.

Other titles by Jean E. Pendziwol

When I Listen to Silence

I Found Hope in a Cherry Tree

Me and You and the Red Canoe

Once Upon a Northern Night

Tale of Sir Dragon, The

The Tale of Sir Dragon

Once Upon a Dragon

Stranger Safety for Kids (and Dragons)