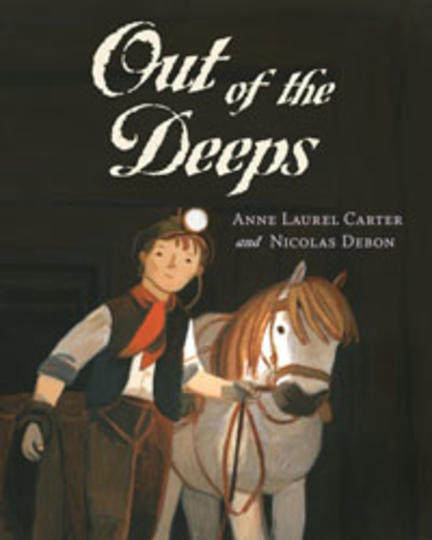 Like many children throughout Canada's history, Savino had to quit school when he was twelve to work and help his family. In Out of the Deeps, Savino spends his first day at the mine working alongside his father and Nelson, his father's pit pony. When Savino's headlamp goes out deep in the coal mine, Nelson leads Savino out of the danger.
In 1944 the miners received their first paid holiday and insisted that their pit ponies receive a week's holiday too. In Out of the Deeps, Anne Laurel Carter captures a boy's first day at work in the mines and a special pit pony's first glimpse of daylight.

Anne Laurel Carter was born in Don Mills, Ontario. She has suffered from a bad case of wanderlust all of her life, which has taken her all over the world. In between travelling, Anne completed Bachelor's and Master's degrees in Education. Anne loves working with children, and became an ESL and French teacher. She is also the mother of four children, but still finds time to read and write. Anne currently lives in Toronto, Ontario, where she works full-time as a teacher-librarian.
Anne is a multi award-winning author of several books for children. Her picturebook Under a Prairie Sky (Orca, 2004) won the Mr. Christie's Book Award in 2003.

Excerpt: Out of the Deeps (by (author) Anne Laurel Carter; illustrated by Nicolas Debon)

"Do you remember two years ago, the day you chose my pit pony in Christie's barn?" Dad asked.
Savino nodded. He'd liked the slender pony with the big shock of golden hair immediately.
"That one, Dad."
The pony whinnied, nodding his head, as if to say Good choice.
At first Dad was doubtful. "He's smaller than the others. And blind in one eye. A good pit pony can save a miner's life."

"Carter's storytelling is flawless and builds a superb sense of suspense and foreboding disquiet... [an] excellent and multifaceted story that presents informative and engaging insights into the dangers, drama, lifestyles, triumphs and history of mid-twentieth century Eastern Canadian coal mining children, adults, and their workhorses."

"The illustrations and the simple text make the story easy enough for young readers to understand Savino's emotions when he enters the mind and the dangers that he faces."

"The evocative writing captures the dramatic tension... [a] compelling book."

"This is a pony story with a difference, and the heroic-animal tale has considerable appeal...an absorbing tale."

"Striking oil paintings in shadowy tones - sepia, brown, gray - are punctuated by the bold lines of the cart tracks and shaft supports that lead Savino into the depths and readers deeper into the story."

"A fine addition to the body of excellent Canadian picture books that are superlative stories for children, beautiful works of art, and invaluable recordings of the history and culture of our country...Out of the Deeps deserves a place of honour on the bookshelves of Canadian picture book collectors and, of course, in school libraries and classrooms across the country."

"The author's smooth writing complements the artwork…An excellent choice for use in units on the history of child labor or coal mining. Recommended."

"Carter's story, based on an actual incident, earnestly depicts the challenges of being a miner; Debon's paintings effectively illustrate the cold, dark mines and Savino's fears."

In this historical account of life in the mines, enriched by captivating double-spread illustrations, young Savino is excited to join his father for a day of work in the coal mine. He is ready to work in the mines and is excited because it is the last day of work before the one and only week of holiday and they will be bringing the pit ponies up from below ground. Savino’s day in the mine is at times terrifying, with the threat of explosion and the disorienting darkness. Savino overcomes his fears and learns to trust the pit ponies’ instincts. The story is based on Glace Bay’s Savino “Hinson” Calibrese’s real-life experiences.

Carter has won a number of awards for her novels and picture books, most recently, the CLA Book of the Year Award for her young adult novel The Shepherd’s Grand-daughter. Out of the Deeps was a finalist for the CLA Amelia Frances Hoard-Gibbon Award for 2009.

This story captures a boy’s first day of work in the mines and a special pit pony’s first glimpse of light. In 1944, Savino goes to work at the mine for the first time. He spends his day there, working alongside his father and Nelson, his father’s pit pony. When Savino’s headlamp goes out deep in the mine, Nelson leads Savino out of danger.

Other titles by Anne Laurel Carter

What the Kite Saw

Cleaning up the LaHave River