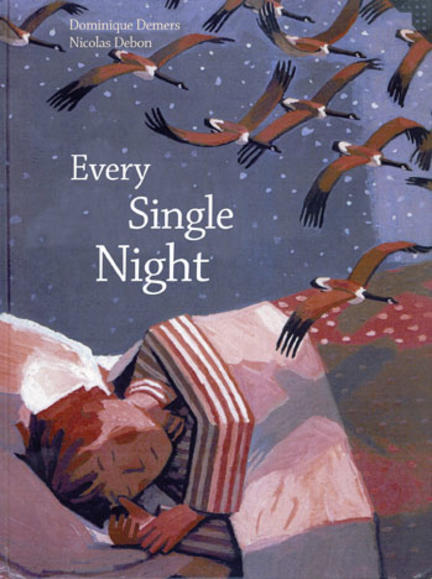 Simon doesn't want to go to bed. He can't close his eyes until his father climbs the stairs and completes their nightly ritual. The world must be put to sleep. Continent after continent, habitat after habitat, even the imaginary realm of elves, princesses and fairies must succumb to his father's incantations before Simon can deliciously let himself go.

This beautiful book, with Dominique Demers' poetic text complemented by Nicolas Debon's romantic images, is the perfect bedtime story. Parents and children will recognize themselves in this shared ritual that takes all the pain out of going to bed.

Dominique Demers is a professional communicator. She worked as a journalist for L'actualité, as a teacher at the University of Quebec at Montreal, and as literary critic for Le Devoir, before becoming an author, speaker, and scriptwriter. She has written more than 30 children's books and also writes for adults. She has been nominated four times for the Governor General's Literary Awards. She was the honorary president of the Salon du livre de Montréal for three years and, since the fall of 2003, she has starred on Radio-Canada's programme Dominique raconte, where she reads books to young children.

Poetic cadences and haunting paintings that are beautifully composed cast a soporific spell. While many bedtime books bring the focus inward to cozy, familiar surroundings, this Canadian one...widens to embrace the whole world.

[Demers]'s language is spare yet comforting, and the plot unfolds like a strangely familiar myth...Debon's glowing illustrations combine intimate visual vignettes with sweeping double-page spreads...With this title, the genre of books written to help children fall asleep has gained elegance and depth. Demers and Deben offer a poetic ceremony that bonds father and son as surely as they know the sun will rise the next morning.

Dreamy, lyrical, and as cozy as a familiar lullaby.

Equally effective in conjuring up visions of other worlds and inducing sleep are Debon's undersea, Arctic and world-of-wonder spreads. And effective, too, are Demers, Dominique's aural pleasures.

This comforting bedtime story is beautifully illustrated by Nicolas Debon.

Every Single Night is truly an enjoyable picture book. The connection between father and son is strong and endearing....a wonderful way to end an evening and slip off to sleep.

How often does a child experience the difficulty of going to bed? Sometimes climbing under the covers means being without the reassurance of everything familiar. The possibility of entering some strange place in the unfolding darkness surrounding the sleepy yet aware child wreaks havoc. This picture book exquisitely handles the question of how to assuage the trepidation and the fear.

Every night, Simon’s Dad tells a nighttime story that traverses the continents. As all the animals and mammals are put to bed, Dad finally pulls Simon’s covers “all the way up this time.” This is when Simon sees that elves, monsters, dragons and creatures that haunt the night have gone into hiding and the fairies who are keeping watch ensure that ‘nothing bad can happen.’

Repetitive refrain soothes the tired yet anxious child. “That’s all done, kid” becomes a reassuring mantra that dovetails beautifully with Debon’s illustrations, enhancing the mood and angst of all children being tucked into bed. The blanket that Simon’s Dad continues to raise gently from the bottom of his feet to ‘all the way up’ helps Simon to understand and accept the idea of the world going to bed alongside him.

“Every single night./It’s always the same, all around/The world…/It’s time to go to sleep.” This sturdy yet dreamy text and the haunting scale of the illustrations make this a great selection for a bedtime story.

Other titles by Dominique Demers

A Funny Sort of Minister