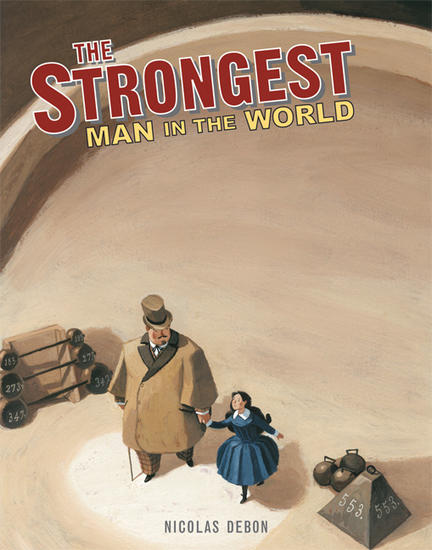 Strongman and circus owner Louis Cyr captured the world's imagination with his remarkable feats of strength and his mammoth proportions. Set in Quebec at the turn of the 20th century, this biography, in graphic-novel style, features the celebrity in his old age as he recalls the glory days for his young daughter. In vivid detail he recounts his adventures traveling through Europe, performing feats of strength that astounded audiences and remain unsurpassed today.

Nicolas Debon's vibrant illustrations and moving text bring the world of long-ago circuses and celebrities to life for young readers.

...engaging...Cyr...is cleverly portrayed as if chiseled from a boulder, and the restrained earth and blue-gray shades evoke an aura of melancholy memory.

...a masterpiece that is certain to entertain readers of all ages. The illustrations are both entertaining and explicit...an excellent read for the struggling reader who is intimidated with books that contain a lot of text.

Debon has performed a service in bringing to our attention a little-known Quebec figure.

Debon uses the book's graphic novel-style format to communicate immediacy and intimacy; we feel as if we really know the man...The book's success is due partly to Debon's skill as an artist and partly to the passion he clearly feels for his subject and imparts to his audience.

Debon proves that it's never too early to fine-tune a child's sense of nostalgia...

Debon uses strip-cartooning techniques to move the story forward quickly, but his soft-edged, earth-toned, watercolour illustrations also give modern children a strong sense of a world far outside their experience.

The story of his life is well suited to the graphic novel style employed here...text and images provide wonderful detail to convey Cyr's impressive strength and vitality...The drawings have a great old-time feel to them, recreating a time of small towns, traveling circuses, and astonishing feats.

This unique graphic novel style picture book with its earth tone artwork beautifully tells the story of Louis Cyr in such a way that it is as if we are hearing the story from Louis Cyr's own lips...We are lucky enough to be taken along for the ride.

...will appeal to reluctant readers.

The folk-style illustration panels, often complemented by full-page paintings, move the story forward and place it firmly in its historical period....popular...

...Debon deftly captures the life of a Canadian luminary...His stunning dialogue makes you feel as if you're sitting in the circus audience.

A thoroughly absorbing tale about a turn-of-the-20th-century celebrity.

...enough information is given to entice young readers to learn more about this little known Canadian...this will be a welcome addition to library shelves.

The Strongest Man in the World: Louis Cyr

As a dedicated fan of professional wrestling and strong men competitions, I was eager to read Nicolas Debon’s latest graphic novel-style biography, The Strongest Man in theWorld: Louis Cyr.

The Strongest Man in the World takes the reader on a journey through the life of Louis Cyr (1863-1912), a world famous Canadian strongman. From his grandfather’s strength training sessions to the first time he lifts a horse up off the ground using his bare hands, Cyr is depicted as a gentle, humble man who has found a way to use his unusual strength to support his family.

As with Four Pictures by Emily Carr, Debon deftly captures the life of a Canadian luminary in under 40 pages. His stunning illustrations are rendered in muted earth tones and his sharp dialogue makes you feel as if you’re sitting in the circus audience. Even though no illustration of Cyr is larger than 3 inches tall, he seems humongous! And when I was greeted with the real photographs of Cyr in the Afterword, I thought he looked tiny in comparison to Debon’s majestic portraits. I enjoyed this book immensely and am ashamed to say that my only criticism is cliché – I wish it were longer!